The Heide Museum of Modern Art is a clutch of buildings set amid a rolling pocket of vestigial lush greenery in what is now outer suburban Melbourne. Before it was a gallery, cafe, and sculpture park, it was home to the Reed family, who added an artist’s colony to a dairy farm. Before that it was an important location in the lands of the Wurundjeri People. 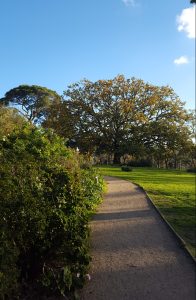 Path to Heide I

Heide I is the cottage farm-house, complete with a walled garden and collapsing cow shed quite near the afternoon shadows of the magnificent Red Gum Yingabeal. 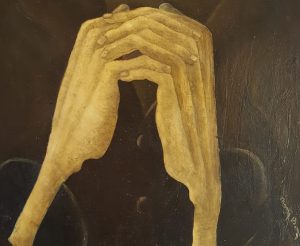 Detail from a rare painting by Mary Boyd at Heide I

Currently, this area is displaying art from the Boyd family, featuring disturbing clay Angels by John Perceval, and WWII inspired paintings by various Boyds in addition to a couple of Nolans in the library. Rather than focus on untangling the intricacies of the familial relationships, I looked at the art. 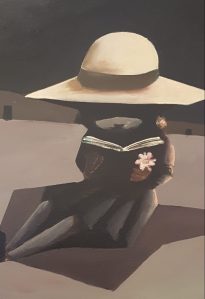 Detail from a Schoolgirls painting, by Charles Blackman

Mainly, I visited to see the Charles Blackman Schoolgirls retrospective located in Heide III (the newer gallery) before it  closed. Often, when people mention the 1950s, it is in the context of an insult, contrasting now to a throwback to an unequal and even brutal time. 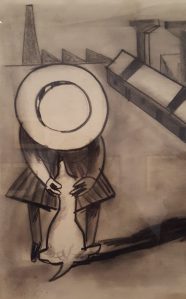 I’ve been guilty of that too, because we don’t generally think about the achievements of say mid-century modern architecture when we decry the suffocating social roles and institutionalised racism and class-ism of the era. 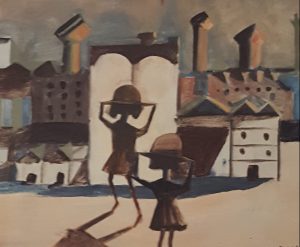 But this highlights how easy is it to forget people like the Reeds, Boyds and Blackman and his wife Barbara Blackman (among others), as they created and flocked to a Melbourne arts-based counter narrative, in protest to and in defiance of aspects of the world around them. Which brings me to Schoolgirls. 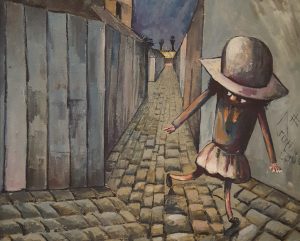 I don’t know what I expected, but it wasn’t to be reminded of my own history almost as soon as I entered. Artists of the 1950s weren’t so different to me, apparently. Blackman may have been responding to the blindness of his wife (see the covered eyes, and posies representing other senses), and to murders at the time. He was also, however, inspired by John Shaw Neilson, the lyric poet of my home town, just like I was in school. He was disturbed and influenced by the news of the day, just as my exposure to news influences my writing practice now. 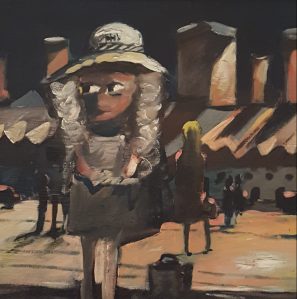 As you can see, even in these examples I’ve posted, there is a bleak and urban dystopian quality to these pictures. It’s a contemporary isolation he has portrayed, but it’s also as if my own two woollen pinafored years at a bucolic Catholic primary school were transferred to an overcast 1950s Melbourne. Its architecture and stadia are familiar, but even the cobbled lanes are made foreboding. Shadows haunt Blackman’s inner city and the girls are sometimes ghosts. So yes, I didn’t expect the art of the 50s to be so immediate and so personally affecting. 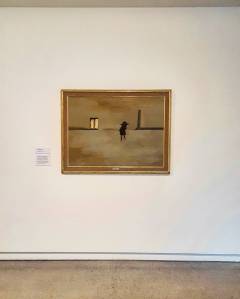 As if to further transport me I wandered to Heide II, the house the Reeds intended to become a gallery. Although it is an award-winning design I can’t love it. It reminds me (again) of my own childhood, built as it is of  almost luminescent and creamy Mt Gambier limestone. 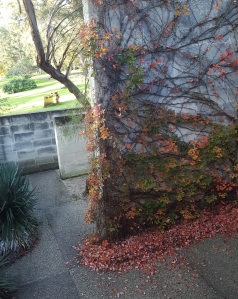 Even the view is enclosed by weathered limestone at Heide II

Wandering around the spaces that were once bathrooms and bedrooms, I can taste (or I remember a familiar) chalkiness and I’m drawn to the views outside to escape the confinement I feel. 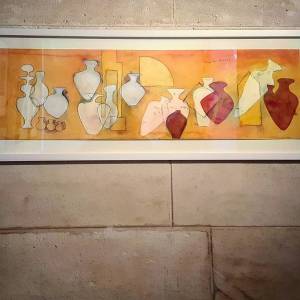 Amphora by Denise Green, aptly on display in what was the laundry of Heide II

All this distracts me from the art, this time featuring Denise Green, an Australian artist based in the US. 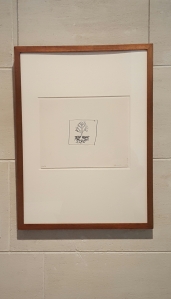 Her works, particularly the water colours and line drawings appeal, but I can’t stay long. Here, the building evokes in me what Charles Blackman was portraying: here I am lonely, if not alone. 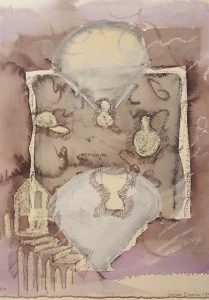 Detail of a work by Denise Green, on display in the former bathroom of Heide II.

Here, I am cold, even if it is heated. Here I am claustrophobic, but not shut in. I am sorry for it but I can’t love buildings made of the long dead. Made of billions of skeletons of seething sea creatures and plants transported from the region of my childhood home. The rooms close around me until I too feel the forces it took to turn life into stone. Here, I am rooted in the stillness and heed Shaw Neilson: There calls / No voice, no music beats on me; / But it is almost sound: it falls / This evening on the Orange Tree, and on this house too it seems.

The old timber homestead feels alive. It is jolly and welcoming, and the new gallery is bright and friendly, but in Heide II, there is real absence, and shadows linger longer in the hush, even when I can read of the comfort the Reeds lived in, in their bright modern home.

So while I love Heide Museum and Sculpture Park, in Heide II I am forlorn, pondering my own history. I am lost contemplating the conversion of youth to age, and the weight passage of time. I dwell upon how mysterious living beings are consumed and transformed under immense social and geological pressures, and are transported across familiar territories I too have crossed, to perhaps, become significant for future people we can never know.