The clock strikes off the hollow half-hours of all the life that is left to you, one by one. – Emily Bronte

I love this time of year; especially the long afternoons of mellow golden light, well at least on those days when it isn’t raining or threatening to. While the sun is shining it’s warm, but not oppressive, while there are plenty of satisfying denouements as glowing sunsets conclude these languorous days, bringing a chill to the air that heralds the winter to come.

It’s natural, but clichéd to think about time at season’s turn, but more so because this happens to be my birth month. In my travels around Melbourne I paused the other day and came across a shop full of clocks. It suited my mood, but if it hadn’t been April I might not have stopped to visit.

I did say ornate.

This shop was quiet but filled with subtle ticks, deeper chimes and muted tocks*. There was a peaceful, mechanical musicality that enfolded me as I admired the antique grandfather clocks towering over me in rich timber tones, as well as the carriage clocks, the vaguely Roman-looking mantle clock that reminded me of home, and ridiculously decorated French clocks and watches. 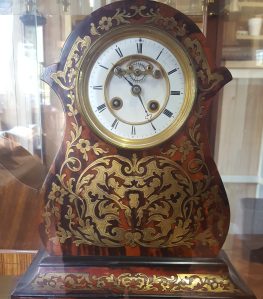 It was a comforting and practical place, where antiques are restored to their working glory. While so many writers, like Bronte (above) call upon clocks as some kind of doom laden symbol, while visiting this place, I wasn’t contemplating my  own mortality.

Not a mantle clock of doom.

No. I wasn’t worrying about time’s winged chariot hurrying near, but rather was thinking about how so many different  mechanisms of different ages, sizes and shapes formed a continuous choir.

I would’ve thought it was a cacophony, but the clocks, sounding different notes in various combinations on the half hour and hour were calmly melodious. Briefly, I stepped into their world, and witnessed how their delicate waves of sound built and spread as I poked around.

Too many of us pay little attention to sound unless we need to. I haven’t worn a watch for years nor lived with a (working) mechanical clock for decades. Although my work life was, up until recently, driven by an acute awareness short deadlines it wasn’t marked by sound (except for my alarm). But last week, on a whim, I was surrounded by hand-wound machines marking the minutes, making me present to the passage of time through bells, chimes, tinkling and tick-tocking. 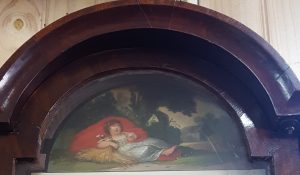 Then, on Sunday I was again contemplating time as I undertook Clockworks. This is an Escape Room by EscapeXperience. Describing it would give away some of the joy, so I will resist the impulse to do so. However, what I can say, as a time-pressured, puzzle solving adventure it’s a lot of fun. It is also imaginatively detailed, a tiny bit stressful, and could become weirdly addictive. And, I would happily do it again, because unlike moments measured in mechanical movements or digital flickering, one can at least hope experiences can be repeated.

*With thanks to Canterbury Clocks and Watches for humouring my whim and for permission to take photographs.