I was reading how two pages of Anne Frank’s personal diary that she covered over will be published (and eventually translated). Let’s say I am unsurprised that most of the news articles have highlighted how these pages feature a ‘dirty joke.’ While publishers, writers, and academics debate the line between historical importance and respecting writer autonomy and editorial decisions, I am wondering other things. Or at least this is a partial reconstruction of the notes I made on the train when considering this issue. I explain this first, because it demonstrates my process and thus, some of my arguments.

This situation reminded me of the debate around the decision to publish Harper Lee’s Go Set a Watchman. While I understand the curiosity, and the allure of revisiting Lee’s world, I’d read enough previews to know I had to resist reading it. You see, I didn’t want that Mockingbird killed twice. That was my first thought. 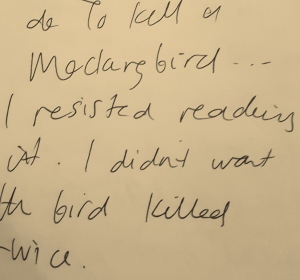 But Watchmen is a novel. Frank’s pages are part of her private diary that she did not intend to have published. Are her insights and most private thoughts more valuable than her decision to blot them out?

I think of technology and how scanners can read texts obliterated by fires and ash and thousands of years of decay. It could restore to the world works we know we have lost and beyond that, works we have never heard of.  This is my science fantasy.

Some novels are writerly, not florid, but manage to demonstrate joy in their crafting. Few however, set out to reveal the labour that goes into this craft. While novels (or any writing intended for an audience) can reflexively examine the history of their long creation, they are experiments, not the mainstream. Prose is by utility prosaic. Writing is not an algebra test; no one asks to see the working out. Published writing is not assessed in that way. Imagine if it was. 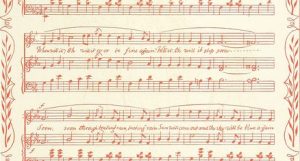 Should we read the patterns between the notes?

Thus, I wonder about what will happen to current and future generations of writers and their work. Will their decisions and edits and accidents be respected or unwound? Will publishers and historians become literary archaeologists, picking over the bones of superseded tech, and the musty ancient archives of online platforms like Wattpad, hunting down surviving scraps of digital drafts that reveal the thinking behind future best sellers?

Will pixels I un-created in a self editing exercise be revealed by future software? Will ‘trashed’ archives and drafts be recovered and restored for forensic analysis?

A book is a series of decisions, intentions, and luck, but what is its opposite?

Does a ‘track changes’ text detailing cut and pastes, deletions, natural errors and problem solving represent a valuable insight into the writing process? Or will these restorations form an anti-book? Is it like looking at the patterns between the letters of words for meaning, rather than the words?

Should we watch the wave or look at the wall?

I’m as guilty as anyone of responding negatively when identifying grammatical and other errors in professionally published texts. Seeing mistakes divides me from the experience of the story. But should clean copy be regarded as a moral virtue attributed to the author? Could raw writing, tumbling out mid-flow in a rough jumble of repetition, hesitation and half-deletion be used as slights against authors? It shouldn’t be, I think. And I wonder this too, at a time when famed authors are now experiencing consequences for their behaviours rather than their writing. Not even perfectly polished pieces of prose can protect these authors, who must have imagined readers appraise their actions like the products of their imaginations. Readers are always unlearning this.

You’ve reached here to find I don’t have a conclusion. I’m sorry, but all I have are these questions and those which may arise in the future. Someone once said writing a story is answering a question. I’m probably remembering my logic studies wrongly, but since this post has no answers then this is not a story. I suppose I should get on and write it.