Humans are very good at destroying things. Just look at the stark bones of the Great Barrier Reef.  Bleached, it could end up being the largest thing visible from space that was once alive.

Yet, it’s almost too large to comprehend, which is ironic, given it is made of microbes. Our human brains don’t really understand scale. We say that man is the measure of all things, but really, what we do is measure all things in our terms and not everything fits.

It’s the same with climate change; to some it’s the mere weather of a day or a life time. All this leads me to think about destruction and scale, but also lost things. I might be channelling my childhood awe of the Indiana Jones films and King Solomon’s Mines, but there’s the romance of mysteries to be solved. There’s the call to adventure, the finding and understanding. The theft and re-appropriation in the name of colonial scholarship. Actually, no, that’s not romantic. Put the stone down, Indy.

Anyway. I just saw Monuments Men. It’s not a perfect film, but I felt it: the lives sacrificed amid the stupid and vile destruction. Coincidently, I came across and am now reading Stuart Kelly’s The Book of Lost Books. 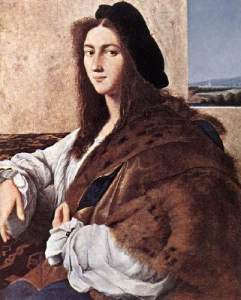 Have you seen this youth? Missing from Poland since 1939.

Confronted with how little survives of the past, I consider how remarkable it is that any ephemeral physical item, be it a book or a painting, lasts beyond a life time or two. I accept accidents and random unintended consequences. These will occur to the work of my grandmother, and my mother and me like they have to countless others. Paintings will fade. Drawings will be scribbled over and thrown out. Writings will float away on broken links and undecipherable drives. Clay will shatter and hopefully it will only happen when I’m no longer here to be concerned about it. Yet, if something is passed on, that’s good. Even if it’s just a Leaf by Niggle. 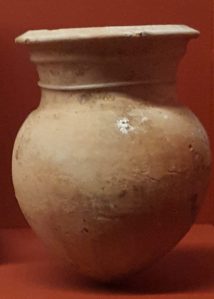 Tiny Jar. One of the my favourite items & one of the oldest at the National Gallery of Victoria.  From Ur, during the Akkadian period.

But deliberate destruction is something else. World War II, the attacks in Syria and Iraq and under the Taliban in Afghanistan are calculated cruelty. In destroying cultural artefacts, these abhorrent groups want to undo our (and I say our deliberately) shared humanity. These groups can’t abide that.

The remains of the past show the humanness of our ancestors.  Their remains are made in our own scale and thus make the long years behind this now, real.

They show too, how alike we are, even in the varied efforts of our long-lost relatives to create, because we still create. They made jars. Dammit we make jars.

We destroy too. Still. But even in the face of destruction, we continue to create.

These items, rare and precious, communicate, now and forever while they are known, the notion that individuals and groups can leave something of themselves to make a mark on those who come later. Nazis and those of their ilk don’t want any past to contaminate whatever future they plan, but art, and music and history exist and persists and thus lets them know: they too shall pass. Terrorist groups who blow up ancient temples won’t last nearly as long as the temples they attacked did. The persistence of archaeology demonstrates their mortality. I mean not just of themselves, but of their goals and plans.

I was going to argue that no ideology has outlasted Göbekli Tepe, but that’s not true, as I’m sure members of the world’s oldest continuing culture can testify. But Göbekli tells us almost no ideology can last that long, and more importantly that we’re not as different to the people of 10th – 8th millennium BCE as we think we are. We who obsess over YouTube kittens and sit around rock gardens, a bit like those who carved in stone the likeness of animals.

So yes, I lament the losses to deliberate destruction, because it is a human cost. It costs the lives of the people who protect these items. In addition, the motivation to destroy art sees killed those who make it; it attempts to nullify the will to understand others; and it undermines the efforts of scholars, archivists and conservationists to preserve our past. In short, it makes us less who we are and the world more ugly.

As ugly as the Pacific without the Great Barrier Reef.