Melbourne’s central business district is served by the City Loop, a ring of (mostly) underground rail lines and their stations. The iconic station, the one on the postcards, is that of Flinders Street, because of its classic facade, the clocks, and its steps. Around the corner, Southern Cross Station serves both the city, and trains across Victoria and interstate, as well as links for the airport. It’s the station that introduces Melbourne to travelers. It used to be a 1970s brick monolith. It’s ugliness demonstrated its utilitarianism. It served its purpose but it never offered a grand entrance. There were no postcards. No one arranged to meet at the door of the old Spencer Street Station (as it was known) like they arranged to meet under the clocks of Flinders Street.

I had cause to catch the train home from Southern Cross the other day, but the old feeling of it being a place of exits rather than introductions persisted. It’s long since been redeveloped, so it’s no longer a brown brick closed up thing, but every time I’m there, I don’t feel welcome. It’s like a cathedral to some secret only revealed to long-term commuter-residents. I’m not yet Melbourne enough to know.

I imagined few want to wait in that vast, dim space under the undulating ceiling, now become grotty with diesel dust since it was completed. I had ‘touched on’ to pay my way, but being there felt like waiting to confess, or, to be interrogated. It’s still dizzying to me. Its scale is weird, and people seem too small no matter if they are arriving or leaving.

Roof of the world of Southern Cross Station.

I watched the V/Line trains at their platforms and longed to be, like them, going further afield. I wanted to be on the way to somewhere distant, with sleeper cars, and a dining room, or at least a canteen. But it was a dream of green hills, and trees to the horizon flashing by, and above them, a view of the wide night sky and the actual Southern Cross. As soon as I could picture it, I wanted it, and as soon as I wanted it, I couldn’t let myself have it. In life, I have found it is often too hard to have the things I want. This time, I would’ve had to find a ticket to somewhere, trudge to the platform and wait. The idea was a clichéd, romantic flirtation amid a grimy and wearying reality.

Instead, I waited on my platform, like I knew I always would,  for the crowded train to take me home, as it is always meant to do. I stood, (there are no seats), drooping with resentment at the inevitability of it, even as I knew everyone there depended upon timetables, lines, and the predictability of its comings and goings. 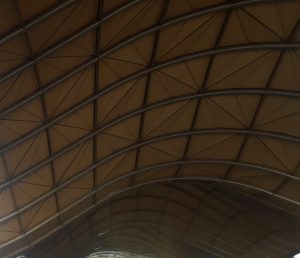 No frescoes on these ceiling panels.

I watched the commuter packs ebb and flow and curbed my own impatience by observing the Metro staff. I watched them in their orange hi-vis, efficiently guiding people and keeping time. I was too tired to think original thoughts, so I pondered how they ended up in this dark mill, and whether they liked the hours, or the power they wielded. Perhaps they were just jobs to these individuals, good enough to get by. Perhaps, they had moments, watching all the waiting passengers, when they too dreamed of Elsewhere with a capital E. 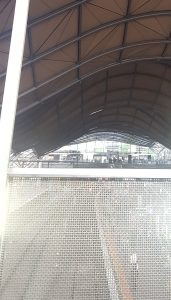