Since completing my studies I’ve got a lil bit more time for recreational reading. Thus, I’ve made a start on my precarious pile of unread novels. It’s largish as there are several handy places to pick up second-hand books near where I live. A while back I started on Cloud Atlas but couldn’t get into it. Couldn’t see where it was going. Also the book had a page missing so it’s gone bye-bye. After that I made a start on The Angel’s Game by Carlos Ruiz Zafón – because I really liked The Shadow of the Wind – that book was intensity in ten cities. No, from my pile of stuff I selected Neil Gaiman’s American Gods.

It was good. I liked it, yet I don’t love it. I appreciated the conceit (which was Douglas Adams’ idea down to the Norse gods), even if the main character Shadow was a bit stupid. He really did feel like an empty vessel – he had events happen to him and around him – except every now and then his passing remarks turned out to be Important Plot Indicators. Some were subtle, but other plot indicators were a bit twee. Loved that it featured pasties. Made me want a good Cornish pasty and I think (or guess really) that he captured Middle America reasonably well – that and the cold. The intermission chapters seemed more concrete. It felt a tiny bit like China Mieville’s Perdido Street Station, not thematically so very much, except in terms of quests and sacrifices, and not really with the language, but just now and again there was an echo of something. 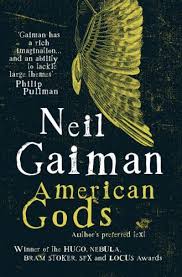 But what was with all the peeing? Seriously, the amount of times the story had to describe Shadow or anyone else peeing was beyond all need. I geddit, people need to pee, but unless it’s of epic import to the plot fewer instances would’ve sufficed. Really. I’m not a prude, it’s just elaborate descriptions of toileting do not a novel make. What gives Neil, bladder infection? Freudian something or was it raining a lot that year?

Anyway aside from what seemed to be an intense focus on waterworks it’s essentially a modern mythic coming of age tragic love triangle Harlequin romance gone bad redemption travel crime who dunnit flim flam finding my family and place in the world supernatural saga.

The bit I loved most was Sam’s ‘what I believe speech’. But even more interesting is contemplating the kind of gods that would inhabit America now because the ones he described were a bit, well, lame. Actually, they were the embodiment of popular stereotypes, rather than gods. So these days, next to Media there would be a less well polished but more biting and multi-voiced Social Media. There would be the modern gods of Anonymous, Gluten Intolerance, Occupy Movement, YouTube, Truthers, Paleo Diets, The Tea Party, Hipsters, Anti-Vaxers, Podcasting, Sexting, Hashtag and Quinoa…maybe. I reckon an Anonymous God would look the part because of the ready made image.

The novel’s ‘tech god’ is not great; while others more qualified than I have pointed to the problematic statements made by certain characters about Native American spirituality.

I read his preferred version, which is apparently longer. While set in a mature United States at the start of a new century, if it was written now it would have a different feel. This though conveyed a sense of a rotten core in the US – all those abandoned towns, factories, farms and homes – that does seem topical given the GFC. So too was the taint of a deeper rottenness in those places that seem to be flourishing.

It’s an American version of Long Dark Tea Time of the Soul, but strangely felt just as dated – like it was in the 1980s. Yet, it’s more like an American Heart of Darkness meets The Great Gatsby if Gatsby was an ex-con instead of an ex-soldier, who worked for a sneaky and corrupt old god, rather than a bootlegger. All this set in an America where Gatsby was in love with cheater Laura as an updated golf cheater Jordan, while the forces behind and above and below are made accessible, and just a lil bit shabby and uncanny.

Anyway, it’s being made into a TV series now and there will be plenty of issues to consider before it returns to everyone’s consciousness so I’m definitely glad I’ve read it before seeing it.

Other books on the magical pile to read (and therefore admit that I have not yet read):