I just attended my second Zentangle class at Abbotsford Convent with Beverley, who is gently encouraging and wonderfully welcoming. The time magically disappears in what is the perfect place for lessons like this. On the edge of the city and not so far from the free way, it is at once busy and peaceful. While we were concentrating, the silence was profound and comfortable.

The cloister surrounding the quadrangle. All around me are patterns of stately decay.

We keep going until it resembles nothing in particular, but something nonetheless, with pencil shading and chalk highlights offering depth. 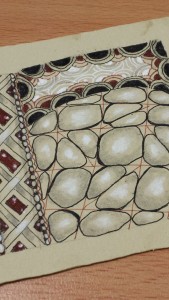 And while every student has followed the same instructions, each result is different. No one is right and no one is wrong, each is an interpretation. It makes manifest what each of us does everyday when we attempt to understand something. 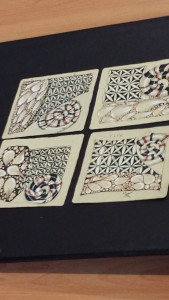 I think this kind of drawing fits with my writing because so much of my writing is little bits of a thing at a time, sometimes a few words here or there, until it becomes a 1500 story or a 500 word flash fiction. Zentangling is the same, you don’t need acres of canvas, but a little piece of paper, or as it happens a little blank journal and off you go. Rather than looking at my phone I can doodle, or write. With both, it’s about ensuring you’re not intimidated into starting by a huge blank canvas or empty page.

Furthermore, it’s about not censoring or judging what you do. You make a mistake but you keep going, one line at a time. There is always some way to fix it later. That’s a pretty decent lesson for writers.

Drawing like this is also congruent with my writing because so much of it is about identifying and replicating patterns. So much so that afterwards I look about me and wonder how I can incorporate aspects of the local architecture into a picture. Like the staircase below:

This doodling helps in other ways too. It’s non thinking time, which I’ve always found useful in allowing ideas for writing to pop up. As a result I’ve restarted writing properly, rather than just tinkering. Recently I’ve sent out stories to find markets, but having done that I’ve looked at what I have left and some stories aren’t finished, or are a bit tired – they need the pencil shading and the chalk lift, in drawing terms. So I’m re-framing one story, while I’m using something from a writing journal I wrote a couple of years ago for class for the central conceit of another narrative thing.  It will all work out in the end.