When I was about 11 or 12 I was given a camera. It was a Hanimex 110 FF with a slot to insert the flash, which consisted of a double row of bulbs that died in a quiet but glassy sphffft sound upon each single use. Imagine a sudden blaze of glory like from photo journalists old movies – it was exactly the opposite. 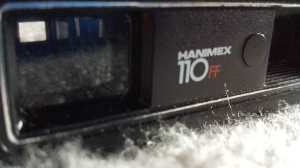 There were no selfies, but I took photos of the farm, of a visit to the zoo, of trips away. As fun as it was, it was also anxiety-making. I only had so many shots. I had to figure out when extra light was needed so as not to waste the flash or the film. And there was a lot of mistakes. Fingers over the aperture, the unfocused views, and over exposed films. There was also the cost. Film was expensive and mistakes or not, development of them had to be paid for, so too the replaceable bulbs. There was a time cost as well, with the processing, which took weeks between trips into town. Such tension in the wait. Even now I suspect there is unprocessed film lying about.

Anyway, I’m not sure when exactly that I stopped taking pictures but I did.

Much, much later, I worked/interned for a uni run newspaper publication. I did the editing, wrote stories, and took the occasional photo.

Some time after that I worked with a Master Photographer. I found the words and with the light, the angle, his camera and immense skill he made cunning pictures of items and places few would find photogenic. He somehow made things beautiful.

Eventually, I got a phone with a camera and even then I didn’t take many photos. It was the legacy of worry,  of such unease I continued to put my eye up to the tiny screen.

About five years ago I bought a digital camera. I’d spent six months looking at what I could afford and what was possible. And then I chose something Nikon because red. It’s a little slow in focussing so sometimes pictures are fuzzy. But I’m no longer fussed. It doesn’t matter if I take a thousand photos or one. There’s no longer a wait to see them and I seldom print them.

With a different phone and apps (like Instagram, but also others) I take more photos now. I don’t know if I’m a better photographer, but I’m certainly a more relaxed one.

I’ve found while you can spend any amount of time and money on understanding photography and getting the equipment, mainly it is, for me, about recognising each opportunity to take that one shot or a thousand.

Other times it’s about being there. No picture required.