I’ve been thinking about Avengers: Age of Ultron since I saw it a week and a bit ago.

I’m not a huge fan of heroes creating their own problems to solve, vis a vie Ultron. But I get it is less complicated for the heroes to go around pulverising robots than killing people. We can all just go for the ride with most o f the violence on this. Only Hulk enables insight into the experience of being a witness to such violence and that was interesting.

Not sure why you enter a super hero world, but I’m not holding my breath for Avengers: End of Nuclear Proliferation or Hulk: Age of Flood Mitigation or Iron Man: Saying No to Slavery, or Thor: End of Terrorism. I guess that would be like asking Mulder and Scully to investigate a non alien abduction or a jewellery heist. This is not cinema verite. So fighting an army of murder bots is guilt free catharsis. Hulk smash on with no regrets.

Avengers: Age of the Scooby Gang

Avengers: Age of Ultron was a big, messy Buffy the Vampire Slayer episode. In fact, I know which one. It was I Robot, You Jane from the very first series. Sciencey-minded Willow scans a book that had trapped the Demon Moloch into a database and ends up dating him online. He builds himself a robot body and does bad stuff and is put down by Buffy and the Scoobies. In this film version, Willow is Stark, and Scarlet Witch and Xander is her twin brother and Jarvis, (in a Giles accent) does all the cool internet stuff instead of Cyber Wiccan Jenny Calendar.

Except ok it’s not quite the same. Because there are sub plots that need attention, precisely because they are glossed over by the actual film.

Glosses on the glossy glossed over scenes

Like the bit where Stark’s business is responsible for killing people. This motivation for action never really gets addressed. Yet two central characters are pretty much told to get over it and chose the side doing the least human destruction. This is problematic at best.

Anyway, the main stuff that Iron Man and Dr Banner/Hulk do instead is dance around their Dr Frankenstein working with Dr Jekyll/Mr Hyde deal. I don’t mind this, but their ethical differences could have been highlighted beyond a couple of funny lines from Banner.

And I do like when Banner is funny. I think James Spader as Ultron out Irony-ied Robert Downey Jnr’s Iron Man too. Spader is always excellent, and always playing a character you want to slap. I just wish Banner had had a couple of smart lines for Ultron on this. So many daddy/science/violence issues to explore. 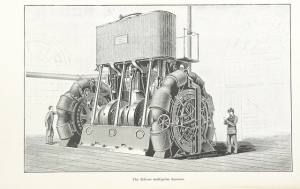 Ultron: Age of the Washing Machine, Cleaning up Society.

I saw what they tried to do with Hawkeye and it worked, but only up to a point and that point was his speech to the Scarlet Witch. Plus there was his significant other’s one liner.

Captain America came off better in this film. As the moral compass he could be bland, but he was the butt of some sweet recurring jokes. He also added insight into the other characters.  Mainly though, Steve Rogers spent most of his time doing balletic sideways triple Salchows with shield moves (10/10), and developing skills to lead the Learner Driver Avengers (Falcon, Scarlet Witch etc). More importantly, his arc segways into Captain America: Civil War. I see that Iron Man is slated for Civil War too, but equally, Stark could have stopped there, on the lawn talking about getting a farm and making the absent Pepper even more absent.

Does the premise for Civil War sound a bit X-Men? What with politicians and regulation and enhanced vs enhanced?

Iron Man: Military Industrial Complex. Preliminary sketches for the system that the Starks profited from and that birthed Captain America.

Avengers II felt like the end of the Hulk franchise as a separate entity. If he shows up again, in any film, I want his story to have moved forward somehow.

As for Thor:  more Thor on his crucial vision quest with handy knowledge about the continuing plot would have helped. Am wondering if it fits into Ragnarök, or Avengers III, IV etc.

Which brings me to…

I am pondering Black Widow’s subplot, since it mainly revolves around ‘female’ stuff and moves towards a love interest that seems a tad unworthy of the complexities of her character. She is the pragmatist, and is always without a mask and without special weapons, and must do what she can with her wits and training.

As Stark and Banner banter over tech ethics, while Thor is off on some kind of cave dive and Hawkeye is at home knitting, Natasha shouldn’t be pleading the case she is a monster like Banner. As the pragmatist, she should be preparing for the next step in combating the big bad, or seeking the kind of therapy that say Faith did after a fight.

Not being able to have kids doesn’t give Black Widow her dark side. Doing everything she did to survive her childhood and training and beyond created her persona. Dr Banner released some inner angst through hubris and the Hulk is his punishment. Black Widow is nothing like Dr Banner or Hulk. She is squaring the ledger on her former life. Hulk is doing no such thing.

It is, in fact, Black Widow and Captain America who are the different sides of the same kind of character. Steve Rogers is about nobility, justice, brotherhood and pure motivations while Natasha Romanoff has lived through lonelier, more corrupt and morally complex experiences. Rogers depends on certainties, including about how people see him. Romanoff depends on the lack of certainties, including about how she is seen. Both are vulnerable because of this.

Where things become less practical for the Black Widow is in this film’s version of her emotional life. By the end, she is some forlorn abandoned waif, when she has never been a victim, even when it looks like she is. And this is meant to sustain the motivation to propel her into whatever next film Black Widow appears in? I get the back to work vibe that Cap and Black Widow try to convey in the final scenes, but she didn’t need victimising.

From earlier films we’ve learned Romonoff doesn’t *need* anyone. Of them all, Black Widow is the most self-sufficient. She doesn’t need cultural and behavioural translators like Thor and Rogers. She not a child, emotionally, like Stark, and although she doesn’t have the responsibilities of Hawkeye, she is not unpredictable, like Banner. If anyone should be in charge of the Avengers or Shield, or say, her own film franchise, it should be Natasha. In fact she and Nick Fury are alike too: slightly questionable, heroic, sly and shifty and catalysts of action.

Or Avengers can become the Scarlett Johansson series, since of all the characters, her’s remains the most mysterious, even compared to beings from other realms. Black Widow is as worthy as any character of political subplots rather than semi-romantic ones.

In her own film, her arc wouldn’t be finished, since Black Widow changes the dynamic of whatever film she is in. Her role in Winter Soldier made that film more able to reflect on the meaning of identity, lost chances and bygones. In Avengers I, Black Widow made the film about mutability and manipulation, reflecting Loki back to himself. In Avengers II it was about revealing something of her inner life and taking risks that save the day and not herself.

The thing about knowing something of how stories are written is that sometimes the scaffolding sticks out. So, when I wasn’t overloaded by the visuals I was finding myself looking at those tent pole moments that hold the narrative reasons for the action up. It was all there, the hero’s call, the rejection, the return, the revels, the moment that binds all the team together after being ripped apart, and the loses and the wins.

The entire section where the Hero Blokes explain why there is no room in the plot for their girlfriends was annoying. It felt like a Screenwriter’s Apology to His Audience. These characters weren’t missed.  We bought the ticket to see the Avengers, not their significant others. Actually though, that argument falls down because of the Hawkeye subplot. Avengers II says: men get to go avenging because of the support of their families, while the women folk, it seems, in their important work (understanding the universe and running corporations), don’t deserve support or attention from their men and/or the writers of stories.

Which is to say, Avengers aint changing Hollywood, even if Joss Whedon’s on board.

Tent Pole: We are Family

The bit that was most obvious as a story telling tool worked well as the aha moment. It was exactly like in Serenity, when Jayne did something he would never do in pushing his drink over to the Doctor, in order to show the crew becoming one team again. Avengers had something akin to this, but it was a moment of collective frisson for the characters as much as the audience. It was much less subtle than in the Firefly spin-off but it worked on the entire cinema audience, who reacted as one with an intake of breath. It brought everyone together, Avengers, audience, all of us while it was clearly a call back to the late night after-party scene. Top marks in class for that moment.

The film did what it said on the box: action, one liners, action, more action. If it felt unfinished, or packed too tightly, it was because it is unfinished. Super heroic lives, for all the skills, magi-tech and violence, are a lot more like life than films in this way. So maybe it is cinema verite! Way to go me for contradicting my very first argument. We have finally arrived at the Never Ending Story we were promised.

They remind me of Westerns, if all films in that genre used the same actors (check), similar locations (Monument Valley – check) and were all linked in a continuing conflict of farmer/soldier vs other (check).

Anyway, these Marvel films will just keep going, without denouement.  Like John Wayne’s Ethan Edwards  returning to the desert at end of The Searchers, the task is complete, but never the quest. There’s no hitching the Avenger’s wagon train horses to a rail post any time soon.

So, after all this I guess my  special enhanced (in)human power is being able to see these tent poles and plot shallows from kilometres away and, when it is warranted, still being able to enjoy the story as a story.

One thought on “Avengers: Never ending cast of thousands”