It’s done. It’s over. I proved I could do it. This ridiculous deadline artificially cultivated online is complete, and for my part I can say I am an official National November Novel Writing Month winner.

O frabjous day! Callooh etc. I would have celebrated earlier, except it’s too all much. 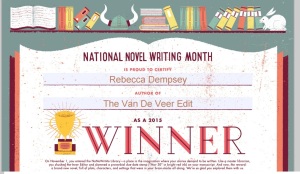 Difficult, un-fun at times, a bit of a drudge just sitting and hurrying, and while I have my 50,000, it’s so drafty I’m getting chills. Or my chest infection is back.

But you know what? In October this story didn’t even exist.  Now it’s December and this 50,000 words and a bit, including some good parts and some outright place holders, still exists. And I want to know what happens next in this story, which is the longest sustained piece of writing I’ve attempted that is not a thesis.

I’ve got an overall plan, and while it developed as I wrote and is still developing, it’s working. Now I have to decide which of the endings I’ve written goes where, and how to tie up this unexpectedly romantic mystery, edit your own adventure tale, complete all sorts of horror elements I won’t reveal here. The weird thing is how the back story for my main character, complete with sibling, appeared fully formed out of nowhere. Well, I say nowhere, but it was a mix of stuff, real life and not, news stories and imagination. It is helping to make the decisions and emotions of my MC more understandable.

There’s plenty to keep me busy then. Plus, I keep having ideas about my novella, which is sitting over there waiting for some attention so I can send it off again.

I hast defeated the dread Jabberwock of indolence & inadequacy by the power of doing.