Went to see the Catherine the Great Hermitage Winter Masterpiece exhibition at The National Gallery of Victoria (NGV) ages ago. At first I was under-whelmed because it was two rooms of diagrams and dishes, plus an imposing portrait of Catherine. This was followed by a video tour of the Hermitage, which was glorious, except for the women speaking through it next to me.

After this I was: was that it? I mean it was interesting, but really?

Turns out I was completely wrong and eventually followed a weeny sign pointing to the humongous rooms chocked to the gills with her collection. It closed in November, so don’t get excited, unless you’re off to Russia.

As impressive as the grand portrait of Catherine was, I deemed it not enough for me. I reasoned there had to be more. Now I wonder why. Since then, I’ve been thinking about about men and women in public spaces and the depiction of them in art. 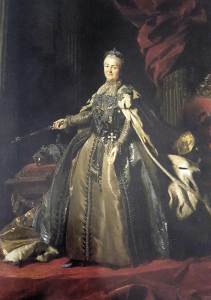 This is the one. Not actual size, otherwise it may have been tricky for Catherine to be called The Great.

Thus, was it about Catherine’s picture being a singular painting, (albeit big) or the subject?

Some pictures follow you with their eyes from their immense canvases. Hers didn’t. She wasn’t asking anything from me in the picture, just demonstrating, through her regalia and pose, her right to rule and her connection (I’m told) to Ivan the Great. That’s nice, I thought. And I moved on.

Wandering around a gallery is a matter of finding the best spot to really see a picture. It’s about avoiding the obscuring shine of spot lights on glass, or oil on canvas and avoiding the shadows cast by ornate frames. No matter what you think, all physically realised art is three-dimensional. This is the most mundane thing to think of when looking at a painting but most of us are too used to looking at pictures of paintings online or in books. Anyway, I first thought this at a previous exhibition with Starry Night. Some art you see the light come off the oil paint, reflecting the angles of the brush strokes. Starry Night was much starrier for this. It demonstrated some paintings are not so much delicately layered by brush onto a flat surface, but carved out of pigmented chunks of shadows and high-lights.

So yes, art is three-dimensional. But so are people. Some viewers seemed to unconsciously mirror the poses depicted in this exhibition. Whether they intended it or not, it looked like they were there to take up space and be seen. Like the art, they were unaware of all else.

Others belonged to crowd scenes, they huddled in en-mass at the foot of paintings to be told about them, before shuffling onto the next explanation. They were less a group of individuals than a many tentacled single amorphous being. I waited for this octopus to move on before approaching anything.

The Hermitage exhibit featured some truly humongous pictures and Catherine’s portrait wasn’t even the largest. Some were best appreciated from the other side of the room, perhaps slightly on an angle, to see the eyes. However, some were still obscured by the octopi, the many-headed being craned centimetres from the canvas. Then again, some big pictures from this exhibit needed to be examined up close, to see the pen and ink work in perfect and epically sized imitation of an engraving.

Striking poser. Men stand like this in front of art. Really.

Then, there were the polite elderly women with their walking frames taking in what they could, while blundering by, completely unaware of others, middle-aged men sauntered through, standing exactly in the correct position to obstruct everyone else’s view.

I can’t blame men, most learn early and are trained to take up space, to walk tall, throw their shoulders back and take their place, because they believe it’s theirs. In public transport it’s called manspreading. Oh, I didn’t see you. Some say. No, you weren’t looking, I think, but worse than that, you weren’t considering the possibility of others, in this obviously public space that isn’t your lounge room. My point is the consideration. It what women do, in art and life: consider others. All those pictures of couples, it is almost always depicted as the man gazing longingly at the woman, while she looks out of the painting. She’s with him, but she’s considering us, or, rather, men. Because I’ve read Ways of Seeing and this kind of art was for men, or men of means. What then to make of Catherine, who collected all of this?

Another woman considering others from inside the frame. Doesn’t she look impressed?

These magnificent works were of everything – animals and boat battles and a heap of St John the Baptist. But Catherine’s collection was selected by men at her behest. What’s telling, is while she favoured the arts, she had a mania for cameos. Cameos are often profile portraits. They are to be looked at, and if you were Catherine, to be worn and handled and stuffed in to especially made receptacles by the thousands. The thing is, they are art, three-dimensional characters, but the point is they don’t look back. Plus, many are of women.

Catherine’s relatives started making cameos of the Empress. I would’ve returned this.

This appealed to me, this cameo collection. Not so much for themselves, I’m not particularly moved by them personally, but Catherine clearly was. After the acres of pictures of men standing a certain way (see above), and women looking out of frames, she retreated to drawers full of profiles. They make no demands. Their eyes aren’t beseeching or imperious – they aren’t even looking at you – the viewer. She could wear them or hide them or display them. I imagine them as a relief, or a pleasant escape, from considering others, and being the focal point of all considerations. 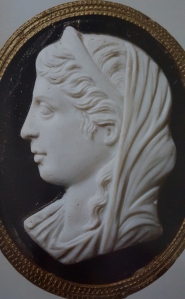 In a few days I’ll visit the gallery again. Mainly for the surreal art display and some ancient Sumer research. Later, I’ll see the new Winter Masterpiece exhibition. This time to gawp at Edgar Degas’ ballerinas and boudoirs, and I will negotiate the space between the oblivious men, the apologetic elderly women and the octopi to find a place where I can stand and contemplate the pictures on my own terms. Like Catherine would have done.