Art can be many things, an escape, a refuge, a comforting but stimulating vision of  what is immanent and transcendent, or a reflection on the human condition, or a combination of these, or something else entirely.

For Science Week, the Science Gallery in the Frank Tate Building of the University of Melbourne opened. It’s first exhibition is BLOOD: Attract & Repel. 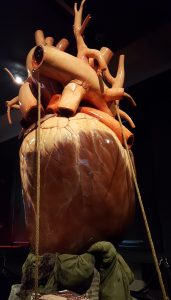 May I say now, at the outset,  this display does what it says on the box: it is attractive (and interactive) and repellent.  The gallery has lofty aims to celebrate scientific achievements and knowledge through artistic interpretation. For this, and for basically existing, it is to be commended in these straitened times.

Beyond existing, this exhibit could set the future tone for the gallery. It is creative, engaging, weird, disturbing, interesting, sobering, beautiful and macabre.

It was also a bit fun. Adventuring in the dark with a torch to see a room covered in luminol felt like I was in an episode of CSI, while another installation enabled me (and about 10,000 others) to become part of the work, using a picture of our fingerprints as pulses are taken, one at a time.

My fingerprint pulse. Another personal artistic milestone I never knew I had

But all this is just what I felt.

However, a display provided actual evidence for my reactions. It invites attendees into a zone to sniff a device that looks like a speaker, which emits the scent of blood. Software then reads the reaction to interpret it. I thought I was feeling quizzical, but science says: 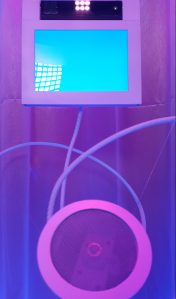 ….well the screen went blue, and that translates as sad. The scent of blood makes me sad. I am yet to decide what this means, or even if I agree. But that’s the art of science: the results won’t change, but your mind can. 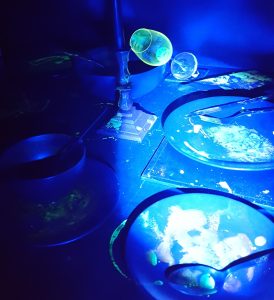 I can’t talk about an exhibition on blood without thinking about recent events. I mean in Charlottesville, but I also mean in Melbourne too. Schools here were postered by local hate groups advocating, amongst other things, murder. Nazis think they know what they are talking about on race and identity, but science sees it differently. It says our blood is basically the same: as humans we are all related. Blood tells us we are but subtly different; it says we are complex and beautiful. Mosquitoes agree – they don’t care what you look like. 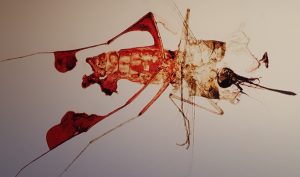 When I hear blood and soil being chanted I think no Nazi has the right to use that phrase. Others have suffered more, and for longer, than some angry dudes upset about statues. They want to stake out a victim-hood that isn’t theirs from people who have done them no wrong. History and now art, demonstrates the truth of this in Australia, with powerful and moving displays, including about language.

However, the most striking work was one of historical documents denying the right to vote for First Nations individuals in Queensland. From a distance the blood stains look like maps, and I suppose they are. They tell us the direction and shape of the land Australia’s constitutional writers called Terra Nullius: our history of genocide, frontier wars, broken hearts, freedoms denied, and humanity unrecognised, and most of all, survival despite this.

And here with a close up:

Try telling the blood bank this.

As you can see even from these examples, the notion of blood is laden with significance. Even if science debunks our assumptions, and can estimate our reactions, it can’t remove visceral responses.

One film about a human being injected with horse blood to foster an equine connection had me wondering if we can do the same with people. This is because right now connection seems hard to come by.

Whether blood ideas are used by racists, or whether blood becomes a tool of fear regarding health and society, it can unite and divide us. But this gallery shows even our differences can become complementary. In a kinetic work representing the blue blood of crabs balanced with red human blood, glass alembic-like chambers move so the two ‘bloods’ flow in response to each other.

And here is a closer look: 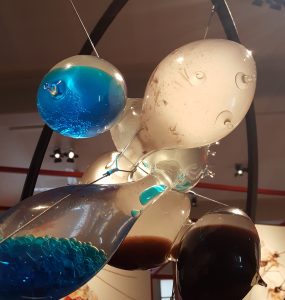 As this work demonstrates, even our differences can be overcome to find balance. It also symbolises what this new gallery does – finds the happy medium between art and science. It shows us we have choices. We can choose to become educated or choose to work out why we react with anger or fear. Of course, once upon a time anger and fear would have been seen as a result of an imbalance in the four humours and blood would have been let to fix it. Let’s not do that any more. Furthermore, let’s not have the need to.

2 thoughts on “Review: It’s always got to be blood”