The State Library of Victoria is an architectural marvel of Melbourne, and a pretty inspiring ‘suppository of all knowledge’ to use an actual quote by a former Prime Minister. It also regularly stages exhibitions. A recent one featured zines.

Zines at the State Library of Victoria.

I am fascinated by bookmaking, book art, book ephemera, publishing, and hands on making. Despite this, I must confess zines have never been my thing . I was entirely ignorant of their existence in their hey day due to life and when I did learn of them, other things were going on. 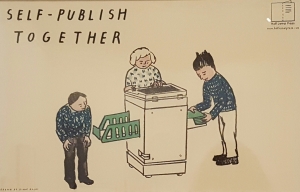 So rediscovering their whimsy, and politics, as well as the appeal of these personal, bespoke magazine projects consisting of much photocopying and short print runs is a delight. But then I am a magnet for past times that take much work for little pay off (see all my writing so far).

Any who, there has been a zine scene in Melbourne for a while now. There have been festivals, exhibitions, touring shows and there is a permanent zine specialist shop in the CBD.  Thus, it is definitely still a thing and the State Library exhibit is a reintroduction.

It’s not the biggest, brashest exhibit, but it manages to convey a bit about the craft and imagination that has kept zines going, despite the internet and blogging, the rise of e-publishing, and social media. Plus, according to those in the know, it has generated some controversy, as much for what it has left out as what it contains. The zine world is as particular and partisan as any, it seems to this outsider.

I’ve been ill of late, which has interrupted everything from things I was going to do and see, to updating here more often.

However, briefly, I have done some stuff. I recommend the NGV Australia (Fed Square) 1930s exhibit and Transformer by Gareth Sansom, which I may get around to reviewing in more depth.

I also recommend popping into the Pop Up Globe to see Shakespeare. I saw Much Ado About Nothing, which was a hoot. But any of the plays now showing are worth it. I will write more on this later.

As for writing? Things are glacially slow, and I’ve missed deadlines and opportunities, but a short story published online last year is now coming out in a physical edition I had forgotten, or didn’t know, would happen. So that’s nice.