Wednesday night I attended a lecture at the State Library of Victoria by Professor Michelle P Brown, entitled Art of the Islands, Celtic, Pictish, Anglo-Saxon and Viking Visual Culture, c. 450-1050, based on her book of the same name. The evening was sponsored by Monash University Centre for Medieval and Renaissance Studies. Professor Brown is also in Melbourne for SLV’s Rare Book Summer School, which is something I am sorry to have missed. 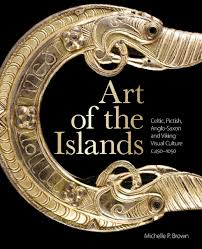 Professor Brown spoke about how Land’s End in Cornwall was once really “Land’s Beginning” for trade routes in all directions of the “known world.” But her overall thesis is that the Lindisfarne Gospel and like achievements, represent cultural synthesis after centuries of exchanges, contact, colonisation, assimilation, and war too.  Thus readers and interpreters then (and now) can see such ancient texts emerging from Scotland, Ireland and Wales as combining elements of Roman, Greek, Syrian, Coptic, Pictish, Celtic, Anglo-Saxon and Viking elements. Apparently, to the untrained, spiraling organic patterns and animal symbolism may stand for a kind of ‘generic Celtic’ but they are in fact regionally diverse and specific. According to another book, Brown calls the creator of the Lindisfarne Gospel (Bishop Eadfrith) “one of the greatest artists of the Anglo-Saxon and Celtic worlds” for his artistry, technical achievements, and his innovations. 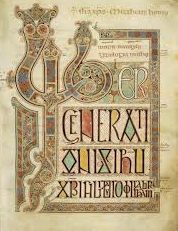 In the above page of the Lindisfarne Gospel we can see the influence from Rome with the Uncial script, with the lower more angular script, evoking Viking Runes.

It was invigorating, hearing an expert convey their deep knowledge and clear passion for their work. It makes me want to try to recall here everything I learned. But anything I write will be a pale imitation. And, as Professor Brown wrote her book, I don’t need to repeat all of it. 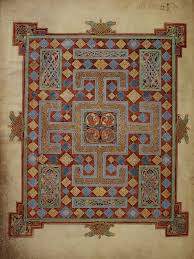 Lindisfarne Gospel “Carpet Page”.  Each page features a different style of cross. Named for the carpets they resembled, there is evidence carpets were used as prayer mats in Eastern churches as well as for Muslims.

But I certainly appreciated how she applied fairly recent notions of intertextuality to ancient works. Thus, for instance, depending on who you were, you would read images of cats as representatives of sin or the dangers of hell, or, sacred protective beings. Similarly with ducks, once sacred Celtic birds are later used by Christians to symbolise the holy spirit. 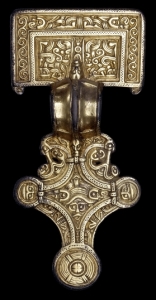 This is the kind of thing I could hear about, or attempt to discuss all day. It makes me question the choices I made and how I missed opportunities to study this. It also makes me think about the benefits of being able to luxuriate in a passion when it is also a career. How rare this is to me: to travel the world, write books and teach people about something you have studied deeply and obviously love.

After watching the super blue moon turn red last night I thought about time. Could that Bishop more than a 1000 years ago have predicted people half a world away would be interested to learn about how he invented a dye for his pages to imitate the colour of lapis lazuli that he lacked on his island?

Imagine that Bishop making his book to commemorate St Cuthbert, only for his art to outlive the fame of the man he wanted to honour.

Imagine making something that survives 1000 years. The Lindisfarne Gospel escaped the destruction of the Viking raids, then centuries of further invasions and wars, the rise of Protestantism and the dissolution of the monasteries, and times made desperate by plague. Its survival is remarkable, but that we can still read its script and interpret it symbolic art is due to the same impetus towards cultural interpretation and synthesis that continues today. 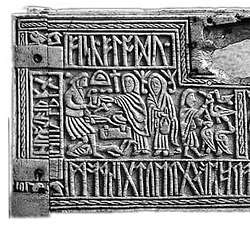 An Anglo-Saxon depiction of Weyland the Smith, who on the carving becomes a part of the Christian story.

My last thought is that those who imagine previous peoples and times as neat, discrete, clear-cut sovereign, ‘pure’ entities are buying into a superseded 19th century mindset. Professor Brown was clear: hundreds of ago, Cornwall was famous enough for Patriarchs as far away as Turkey to raise funds for famine relief. People might have travelled for missionary work or to trade for tin, but where ever they went they took their beliefs, faiths, myths, arts, and their DNA with them. This cheers me immensely,  alone, on the other side of the world.