I keenly dislike the phrase ‘strong character’. It’s a cliché and it is often unclear what is meant – either an individual who is well-defined, and/or easily identifiable, or actually physically and/or emotionally tough. And it is different to powerful. Power is about agency. You can be well-defined or even tough, without power. For example, Jayne from Firefly is tough, but lacks power (especially when caught trying to betray his crew). Inara Serra has power through her social status in the Alliance and financial independence but she is not gonna beat Jayne at arm wrestling.

I am particularly sick to the back teeth of female characters always being described thus, in addition to the word feisty. Can everyone (mainly journalists) just stop with the inane shorthand about books and films and the roles women have? If you have to explain what ‘strong’ means, in any conversation about character, it fails the common sense test.

If she is really a well-rounded character she will not just be ‘feisty’, but reactive and interactive as the plot and situations call for, as close as one can  get to a human being IRL.

Speaks for itself, yeah?

Think of you or me. We’re not just feisty or upset or ecstatic or strong, or morose, we’re complex beings of changing emotions and clear and hidden motivations usually trying to justify our existences and fending mostly for ourselves out in the wilds of modern urban civilisation. Why should the worlds and characters we attempt to create be any less complex? Why reduce women to one or two adjectives? This also goes for super intelligent nylon, fourth dimensional angels, sentient rocks, demonic robots, psychic cats and time travelling trees.

Few beings are seldom all good, or all feisty or always strong, because that equals boring and means they do not undergo an arc. Most people and characters also believe they are just and every character needs something to play off. Every character believes they are the hero in their own story. And always, what they should be, is made to feel real, or as real as possible. If that means your super-intelligent nylon is a bit moody when hungry, why not demonstrate it? If it means your demonic robot cares about the annihilation of earth and also rescues puppies, again, you can make it work. Make your physically strong character have mental or emotional weaknesses, or undergo situations where strength of that kind doesn’t matter.

For some obvious instances: Thor wouldn’t have changed his attitude without undergoing physical weakness in a completely foreign world. And as intelligent as he is, The Doctor wouldn’t need companions if he always knew what to do in every situation, and was always infallible. He needs characters to do what he can’t or shouldn’t do.

If creators continue to subvert expectations while taking readers and viewers along, it all helps change the culture we are in. And it helps in the story to bring out the light and shade in any situation, move the plot along and the audience finds out more about the character, without hideous introductions something along the lines of: ‘Hey there, I’m the Nylonic Wonder, feed me or else’.

This is a long and is good, so go read this.  As for comics, there is the Hawkeye Initiative. Once you see it, it speaks for itself. 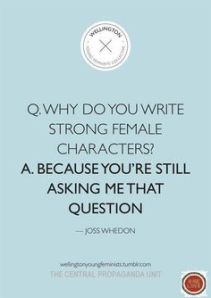 Yes Dorothy, there are stupid questions.

4 thoughts on “Strength of Character”