Here are some first and maybe second thoughts and feelings about The Time of the Doctor, and also about story telling.

So what this story gave us is a chance to see a time travelling companion juxtaposed an aging Doctor staying in one place, for a long time. It was the opposite perspective from the usual one where the Doctor runs away from his aging or former companions. This Timelord dying of a cranky old age at the end of his long life, where each saved life was a victory was a way to give him insights as he was about to regenerate.

As a plot device it took me a while to find it and it was interesting to see time truly catching up with ‘an ageless god who insists on the face of a twelve-year old’ as River once noted. It also gave a plausible explanation for the show not ending with the Doctor’s death(-ish).

Did I say Matt Smith is amazing? He is amazing. Even under prosthetic make up and wigs and bald. A pity about all that really, but at least the story addressed it head on (so to speak) rather than cop criticism over wigs. Speaking of which we all know Karen Gillan was also wearing a wig too right? Are we wigging out?

Too many ideas. And not enough ideas.

Yet there are not enough ideas: recently Doctor Who has mainly been about how Clara’s tears are magic.

Clara’s tears seem to solve all problems when combined with special pleading. Don’t explode the Moment (cos tears), get Gallifrey to help (cos tears), dissolve the Great Intelligence (cos tears), realise she is Dalek and explode the asylum (while sobbing). Amy had gumption, she made a sonic probe and learned how to use a sword (twice) and used violence and death to solve problems. Donna would argue to get her way and stop the Doctor from doing stuff. Rose would pout yes, but then she would motivate others to problem solve (Mickey with the truck, the crew of the base). Martha would use her medical and scientific skills.

It would be nice to see Clara grow or change as a result of her special knowledge of the Doctor (having been inside his consciousness/life/tomb thingy). There are glimpses, especially in her interactions with the Tardis. But it’s interesting that Smith’s Doctor treats Clara more like a child than he ever did Amy, whom he first properly met as a child and witnessed growing up. Please, please let Clara develop into someone who can do more than cry, plead and occasionally die.

Fools and liars and family

Clara was also treated badly or made to look bad in this story. Fool her once. Shame on her. Fool her twice shame on you. Fool her again, shame on us all. Compared to the Doctor leaving Amy and Rory with their car and new home, this was mean. And she was portrayed as almost entirely self-absorbed and superficial: while the Doctor is defending an entire world and dying she is worried about a turkey and what he looks like.

I get that it’s the Christmas Special, but why shoehorn a town called Christmas into the story? Or why shoehorn Clara’s lame family in, especially since they’ve barely rated a mention before? They’re not like Rose’s family, who were always a part of Rose’s domestic back story. In fact Clara’s back story feels like a series of vignettes of a character trying different things. It could be a clever metaphor for her split identities in saving the Doctor. But feels less real than Amy’s attempted careers and more like a series of portraits of a life, like the pictures in the Under Gallery.

This is in contrast to the families of Rose, Martha and Donna, who always felt present in their lives both in and out of the Tardis, especially when they’re orbiting living suns or black holes. Always, Rose and Martha’s distance from home and family when facing death was present to them. Yet this never occurs to Clara. Does Clara care she could die and her father never know where, or when or why or how? If Martha is about to die she calls her mother. Before Clara jumps into ‘the light’ she doesn’t call her Dad. Is this about the style and focus of RTD vs Moffat or something else?

And about the sending her home thing. Clara’s not thinking, like Donna did, that she may never see her grandparent again, but only that somehow the Doctor has betrayed her by sending her back to save her life (just like he did to Rose a few times).

Back to Clara’s family. As incidental to the story and (apparently to Clara) the only redeeming feature is at least the grandmother is intriguing. Could she be a forlorn might-have-been companion? Or a victim of a weeping angel? Or Christmas Special Madge’s relative, given that Victorian London Governess Clara had a charge called Digby and Madge had either a brother or brother-in-law called Digby?

The why of stuff

Why with the entire hologram stuff and the nakedness? The only point is the Doctor’s conversation with the Sister about his body, which he has been ‘rocking for centuries’, while remaining youthful. To contrast this to his later aging, which again felt like a bit of a ploy to make Peter Capaldi look younger (a bit), except it was undermined by the process of regeneration itself, which reset Smith’s Doctor before he changed (so very suddenly).

Remember when I warned about info dumps and crowding plot moments? In a couple of seconds the Doctor and Tasha Lem manage to reveal the entire point of the Amelia/Amy/Melody story arc, regarding the Papal Mainframe, the exploding Tardis, the cracks in time, the Silents, Madam Kovarian and River Song. Thanks for that. However, it all could have been so much more satisfying, if say Amy and Rory had learnt this too. Then there would’ve been an emotional pay off, rather than the rueful reaction of Clara. I get that life is not like that (the Weeping Angels demonstrated that in the first episode in which they appeared), but still.

All this information was crammed in so it felt like it was two episodes in one. Or an episode from a couple of seasons ago, crammed into the final episode for this year. So the Silents were confessors. Ok, makes sense, but why are they electrical and fighty? So Kovarian was the leader of a renegade group from the Church. Ok. Nice to know but it meant nothing to Clara. If River had been there, that would’ve been different. Imagine an angry River, even Library Projection River, having a go at the institution that defined her life or leading an army of Silents in a war to save the Doctor. Now that would’ve been something to see.

Anyway, more Lem would’ve been good. She was under utilised, when she is apparently quite important. Pity we’d all never heard of her before, except for the mention of her Church. And why is she a psychopath? Why can she fly the Tardis? I get she is ‘like’ Clara, in that she can die and then fight off a nano-Dalek possessing her dead body…but what then?

The how of the siege wasn’t clear, while the war for Christmas was rushed. Viewers didn’t understand it wasn’t just the Doctor and a backwoodsy town defending themselves, but the Mother Superious and her church/army as well.

More about Trenzalore. More of the Truth field. Why wasn’t ‘the oldest question’ asked by one of the locals first? Like hello there, who are you? Oops, the Doctor must answer, Gallifrey appears and all hell… 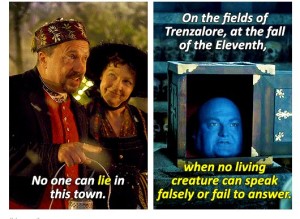 More could have been made of this…

What of the Church? What happens now with Gallifrey?

More Clara DOING something other than crying or worrying about turkey. Although at least she got everyone out-of-the-way when he began regenerating. Oh, and served the cooked turkey.

It took me a while to work out the drawings. They are by the kids of the town. As the town’s Geppeto in the middle of a siege, the Doctor tells them his stories and they give him pictures. But why?

When writers and directors do something like this I want it to mean something. If they do draw our attention to a thing, by continually showing it in a story it gathers significance, just by being noticed. And I noticed. But the pictures and their significance weren’t alluded to, or explained, or even acknowledged. Grrr. 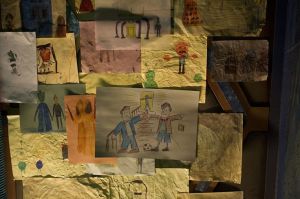 Speaking of significance what about the focus on the Grandmother’s ring, and on the ring on Amy’s hand?

Ok, so Lem didn’t want the Doctor to take technology to the planet…but he had his sonic screwdriver with him?

Too much of the dialogue was difficult to understand because they were talking so fast. What did Clara say her name was? After the regeneration I thought the Doctor said ‘Guinness’ instead of ‘kidneys’ (weird) and I had to go back to work out the joke about the colour. Say what you will about Tennant’s regeneration into Smith but at least the enunciation was clear from everyone involved.

Awesome equals everything Matt Smith said in his soliloquies and Clara’s speech to Gallifrey, (although why didn’t she think of that the first visit)? Interesting to note it was a kind of paean of the actor to the writer at the end as well, with Smith saying ‘he wasn’t forgetting one line of this’. Except it was written by the writer for the actor to say. Nice one. In fact almost everything Smith said and did embodied gravitas and humour, sincerity and his usual awkward cheekiness as the Doctor. Loved the dancing.

But he is gone. So soon but no, not forgotten. 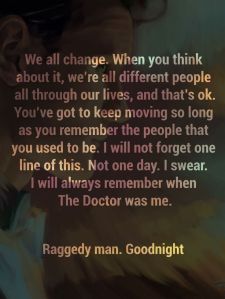