If you like Marvel films you’ll like Guardians of the Galaxy. You may like it even more if you don’t like everything Marvel has done. I liked it. It was smart and sweet and nostalgic, with some great performances from the cast, plus with added bonus surprise cameos and shout outs for long-term comic readers. It was like ET in reverse. Mostly though, as others have mentioned, it was funny. But, like I say, if you like these kind of films you may have all ready seen it and if you haven’t you will and you probably won’t see it on my say so anyway, cos who the hell am I? Right?

So why write this? This is about what it made me think and feel. We like these kind of films to be a bit of escapist dramatic comedic nonsense (in a very serious big business Hollywood way). The film is full of beautiful people and good laughs and quite a bit of emotion.

Yet, I didn’t quite manage to get to that escapism. Some aspects of the plot and some of the speeches brought me crashing back right into the here and now. Or over there and now. I don’t know if current geo-political events are making me more sensitive or whether now is no time for light-hearted japes in the face of unrelenting animosity.

It was about aspects of the plot. One party was bent on the total annihilation of apparent enemies for reasons not fully explored, but was clearly motivation enough. There was the usual political and military response which was a bit Air Force One (see what I did there), in terms of noble leaders meeting unremitting vengeance.

In the middle of this, a disparate bunch of ne’er-do-well professional thieves, assassins and bounty hunters get good lines, humour and action. They crew up much like in Star Wars and Firefly and are made a group through their shared survival and awareness of each other’s various experiences of horribleness – including murder, kidnapping and genetic experimentation. Happy times. 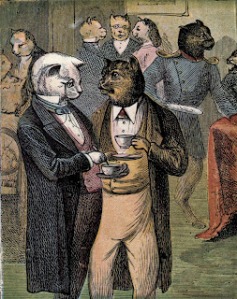 Genetically modified and tortured steam punk cats for a possible time travelling spin-off.
You know it.

My thoughts are not about this bunch of reluctant but thrilling heroic types. I got their backs. They’re cool. I mean really cool.

No, my thoughts are about the plot. I was somehow stuck, in this middle of this alien feel good high stakes action drama comedy, thinking about how violence and revenge begets violence and revenge. Ronan the Trouble Maker (Accuser but whatevs) wants to destroy the galaxy in a fundamentalist push that even has his Emperor Palpatine dad figure Thanos thinking it’s a bridge too far.

Obviously, motivation needs to be big for the reluctant heroes to bother to do their thing, but for me, such massive destruction seems too indiscriminate for Ronan: Who do we hate? Everybody. What we gonna do? Kill Everyone.

I found my self thinking about what drives someone to contemplate genocide. Why kill everyone if one specific group has somehow perhaps harmed or wronged you? Why use an ultimate weapon when you can wield power merely with the threat of it?

During this, of course, I was cheering for the Heroes to save the day. They had to for the galaxy to continue to exist. But I found I wanted to understand Ronan et al more.

And, for all the aliens and genetically modified raccoons, it felt really personal. It was all too human, basically, what with singularly driven Kree fanatics verses casual Xandar citizens, military and political leadership who are mostly uncomprehending of the danger they’re in. This, in a universe where the mostly American-accented troops and merchant-spaceship galactic criminals band together to defend justice and their alien way of life, while the Bad Guys are mocked and ultimately defeated, without us really understanding their motivations.

If all this rings a bell in the here and now, then you’re not alone.

Maybe I’m asking too much of a film based on a comic strip, where visually and viscerally characters are demarcated as one thing or the other. But this is where film can express so much more. I think this is why there are so many fans of Loki in the Avengers etc. Tragic hero of his own story, Loki, (in his mind) is forced into playing the villain to win his father’s affection or respect or power, but it is never enough. We don’t want Loki to win, but man, the feels.

So much thinking. This is exactly what I didn’t need from Guardians of the Galaxy. On all sides throughout history there are those who do and witness terrible things for both noble and really messed up motivations. Do we side with the Spartans or the Persians? The Crusaders or the Saracens, Gauls or Romans? Add any current day conflict here:

What I’m fumbling towards is the need for our storytelling in whatever form, be it comic or film or novel, to demonstrate that it is ok for characters to be nuanced and for the world they live in to be complicated. Ronan would have been all the more menacing and mixed up for demonstrating a closer devotion to his daughter(s), for instance. If there was any sympathy that could have been elicited from the audience, it would’ve heightened the sense of peril.

In the end, Ronan could’ve been Sauron for all we knew, the god of grasping and despicable malice at large in the world…destroyed by a precious small glowy thing that difficult to get rid of. Yet Ronan is a person. As an individual I need him to be less Sauron-like and more complicated – like a physically stronger, more fanatical and corrupted Saruman.

So um yeah, Guardians feels like Fellowship of the Orb a bit, but with comedy, and space ships. Not the conclusion I thought I would reach with this.

But there you go.