I attended a book talk-launch type thing the other evening. It was for Molly Oldfield’s The Secret Museum. It was a good talk. Oldfield was erudite – full of interesting and amusing anecdotes about meeting international museum curators and seeing first hand all the things they can’t display.  To her credit, she coped well with woolly headed half question-half statements from the audience, signed books and endured selfie-taking with British bonhomie and composure.

It is a book you’ll probably want to dip into and browse, rather than read cover to cover. I must admit to knowing nothing about either the book, or author when I accepted an invitation to attend. If anything, I was expecting a novel, but got something better: a resource for fiction.

Yep. I too bothered a polite English author for a signature.

So that’s the book. It’s a little like a fun hard-back encyclopaedia. In fact is an engaging encyclopaedia of Oldfield’s experiences of seeing the exquisitely odd, incredibly rare, and immensely valuable.

The cover is beautiful, and inside is full of whimsical illustrations, sometimes in place of a photo because some items are too delicate, too big or too precious to photograph, which is a pity. I do want pictures of bejewelled ancient stuff, not just sketches, no matter how good.

If you followed my Twitter feed of the event, you would’ve noted it got me thinking. Even before the author arrived. To wit, I was tired, unreasonably open to feelings, and prepared to chuck, pretty much everything, in.

Listening to the academics chat as we waited for the author, what came over me was their complete lack of a sense of privilege. I was in their world at this event; as they spoke, while I, once again, felt like I had snuck into a university and was there contrary to the evidence of my invitation. This was not these perfectly normal lecturers making me feel this, by the way. These folk were not really aware of me at all, and in fact, that has felt like the case over the duration of my studies, even if it has sometimes been untrue.

So there I am, egg sandwich in hand, realising this personal sense of unworthiness that pervades everything stems from two things that I carry over from my childhood.

An awareness of poverty. My childhood was not exactly an urban Harp in the South poor, but the rural, hard-working ‘battlers’ kind of many decades later. It was enough that I knew things like braces for my teeth and school holidays at places that were not my relatives houses were off the table. That’s not to say I didn’t have an engaging and varied childhood. There were animals, vast landscapes, friends and family.

The worst bit was being made to feel it. To feel embarrassment for a situation I could neither explain nor change – there is no empowerment in being poor as a child. That refrain so many kids hear now – I didn’t know I could do anything I wanted. To the contrary, every day experiences taught me that life was a series of barriers so that our family getting a colour TV seemed almost as impossible as me going to the moon.

(Yes I know: #firstworldproblem. But my neighbours and friends at school, they had colour TVs and Betamax. It’s all about context. Plus check out the Social Determinants of Health Alliance for why this stuff is important.)

What made it worse was not being able to read. It was an exclusion so total I stared out school windows, watching seagulls wheel above the playground as they wintered inland. It was twin to being poor. I was barred again from those who regaled me of their summers spent by their family’s in-ground pools reading I don’t know, Anne of Green Gables or some such. (The height of sophistication at the time – I mean pools, not the book).

I caught up. I learned to read and started writing stories. I realised poor is a continuum through reading. But the feelings – of being unworthy, of being an outsider, of not belonging and of being unsuccessful, have remained. This was heightened when Oldfield’s resume was revealed. Her achievements: degree in history, author, columnist and question writer for QI. We are so different. Or is she the type of person I could be if I believed or had the magical resources that seem to make life easier for some people? (I say this without any knowledge of Oldfield’s background beyond her talk. It could have been wall to wall tragedy for all I know.)

Just like Molly Oldfield reveals the behind the scenes of museums with her book, we are all cabinets of curiosities inside aren’t we?

We hide so much, from ourselves and others and what we hide are both treasures and disturbing curios. In the Museum or Cabinet of my childhood, I would  find the first book I read, second-hand and home-made school uniforms, and the cheese and gherkin sandwiches my best friend used to  take. 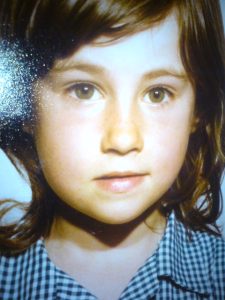 Sad me. Reasonable hair day though.

That little girl who was me – I’m not her. Yet I’ve hauled the weight of her problems around so long I may as well be that sad and bullied little kid.

So I believe I’m unworthy of being successful regarding doing the things, as a contrarian, I’m somewhat compelled to attempt. Furthermore, not quite succeeding as I want to means I feel like I’ve sabotaged myself or correct in my assessment of being unworthy.

The other night though, listening to all the talk of the past and of cabinets of curiosities from distant places, brought me to a decision. Amid the irritability and slight headache of an epiphany and/or sinusitis, I decided to put the museum of my childhood behind me. It’s safe, I can still visit, but I don’t need to carry these feelings of being unworthy, of being undeserving, any more.

The imp of my perversity asks: do I?