Mainly because they involve heists, bank vaults, rare and precious things in a museum, time travel and starting a day doing one thing and spending much of the day running around doing something else.

Obvious innit? I mean we’re still waiting for the episode about vacillation consuming gremlins but this was ok too.

AMY: Don’t tell me. This isn’t Earth that isn’t a real house.And inside lives a goblin who feeds on indecision. 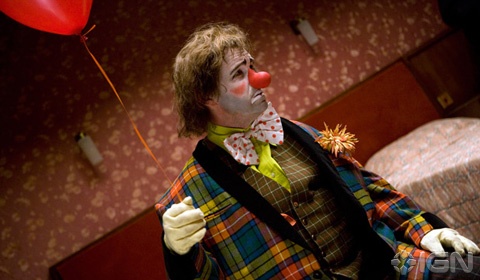 Any monster you like Mr Moffat, but not these again. Nooooo.

What do we take when we steal things? The Doctor breaks into the inner sanctum of the Bank of Karabraxos to break out the Teller, who is a hostage, and his partner, and to offer payments to Saibra and Psi, at the behest of Old Karabraxos, who regrets everything she did as Young Karabraxos. They are stealing back regret.

On the surface it’s a response to a Call to Action in the Hero’s Journey. To steal something and get away with it for The Architect. On the surface my wallet was lifted out of my bag at Flinders Street Station concourse. Simple premises that set the stage. But things must align for events to unfold as they do. Script writers can use tricks to make plots align, like work backwards using time travel. Real life is not like that. Unless, actually, there is an Architect.

The Doctor gets a call, assembles a crew, learns what needs to be done, designs a plan, stakes out the bank and sets up what they will need later, then jumps, wipes their memories and fulfils the plan. This is told backwards.

SHERLOCK HOLMES: Once you eliminate the impossible, whatever remains, no matter how improbable, must be the truth. Arthur Conan Doyle.

So as Conan Doyle says what happened to me was improbable. But like Douglas Adams, I prefer the impossible:

DIRK GENTLY: The impossible often has a kind of integrity to it which the merely improbable lacks. The Long Dark Tea-Time of the Soul.

Basically, my day demonstrates how the impossible makes a better and more convincing story than the merely implausible.

To start, the day was full of unusual juxtapositions. Literally, I had just come from inside a bank vault only to be robbed. I went from looking at 12th century manuscripts in the Old Melbourne Mint, which is now the Hellenic Museum. It was cosy, dark and full of impossibly valuable books and silverware behind plexiglass. Then I time travelled – all travel is through time – and within a second my day is transformed from one of wonder and sunshine and security, into panic and tears and running around trying to get help from non-existent police in their large and abandoned police station in a big shiny and useless box. 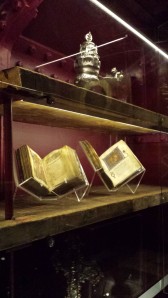 Turns out my thief was reasonably talented, but not quick enough for a Dickensian villain. And those girls, upending assumptions and getting to be heroes for a day – how are they changed and how have they changed others by their actions? Metro staff certainly were cheered by the fact they realised teens aren’t all terrible. I am happy because I got my stuff back. That kid learned a lesson not to underestimate girls or crowds.

Any way, getting by is difficult enough and any thief could be a hero or a punk boy who wants to attempts something for kicks, or out of desperation.

Similarly, the Doctor’s adventures mean Clara is rushing about any-when while dealing with the everyday world every-when else. It’s high stakes in space and tension at work (in The Caretaker). Some days are just like that I suppose. Drama one minute, museum visits the next.

I can’t help thinking that kid stole my wallet, but he really stole an hour of my life, while those quick thinking girls returned my wallet and gave me a story. If we relate this back to Who, the problem for Clara is she is getting amazing experiences – stories even – but who is she to share her anecdotes with? I foresee Mr Pink becoming more involved.

This episode is reminiscent of The God Complex with a similar-ish Minotaur creature in the Teller who again feeds on mind-stuff. This time the mind-stuff was guilt, last time it was faith. In the end yet another monster is not the monster after all.  Just cos you look scary and are responsible for killing people doesn’t mean you are bad per se. Moffat has made it clear that monsters in Who have human faces. Very often the Agents of Bad are severe disciplinarian-type women in business suits: Karabraxos, Madam Kovarian, Miss Kizlet, Matron Cofelia and Missy (what’s with MK?).

So, once again, the scary creature is a victim – a prisoner in a kind of ‘endless shifting maze’ bank vault prison. Once again too, they are enmeshed in a love story reunion recalling that of the scary creatures of Hide, who were also separated and mistaken for being the villains, when all they were doing was yearning for each other.

Love is difficult for monsters. Speaking of which…

When I wrote about Sherlock I wrote: The meanest things are the truth, because the really, really vilest you can be is about yourself. And nobody, not even Sherlock, knows you like yourself. The Doctor, as we know from The Dream Lord of Amy’s Choice, doesn’t have a high regard for himself. All he remembers is that he hates The Architect. He doesn’t often say that word, but it’s interesting he uses it, and because he uses it, he works out The Architect is in fact himself. Another neat little Moffat Loop within a time shifted bank robbery.

In the end The Doctor is not The Architect, but Sherlock. He solves the case that he doesn’t recall taking on and demonstrates no one can trick The Doctor, not even himself.

I may have mentioned, in everything I’ve written about Doctor Who, that it’s about identity. Time Heist doesn’t let us down this time either.

Overcoming our fear of the Other and stuff and our hate for ourselves is one of the conceits of this episode. It asks what might human look like in the future, how will we change and what may stay the same?

Other questions occur. Like: Who are you, when as Saibra, you’re a mutant who is everyone? Who are you as Tech-enhanced Psi when you can delete everyone from your memory? Who can you trust if you only trust yourself (as your clone) and your clones fail? Finally, when all is done, who you gonna call (sorry couldn’t resist), when you regret everything.

Mostly, this episode is about how humans reflect each other – literally as Saibra demonstrates and metaphorically. We can become, very quickly, people who sacrifice their lives for strangers, as Psi seemingly does for Clara.

Shape shifters represent the fiction of the outward persona, the story we make up about ourselves, and the possible frictions between that story and the reality underneath. They are numerous in folk tales and in speculative fiction. And there are characters who can’t touch or suffer consequences of touching (like Gwen Raiden in Angel). This could represent anything from the separateness of individuality to the consequences of or taboos around sex. With characters like Psi though, they embody the dream of easy learning – but so to demonstrate the price it of easy forgetting.

Without specific memories Clara and The Doctor demonstrate that we revert to types established through repetition: The Doctor as cranky leader, Clara as caring follower. Which leads us to…

Unlike on Starship UK in The Beast Below where the Doctor was angry with Amy for deciding to forget what she knew, The Doctor and Clara go along with the forgetting until he works out how to remember. I think more could have been made about their lack of choice in fulfilling the bank job and what it meant that they had no guilt about what they were doing. If you have no guilt, what wouldn’t you do? Similarly, more could have been made of The Teller’s lack of choice by comparison.

Speaking about volition, it’s very difficult not to think. You especially can’t think when you’re full of fear and being shouted at not to think while being pursued by a brain consuming guilt monster. #justsaying

A bit like my day, this episode is one from which I can draw no conclusions. What was bad turned out to be not so much, who was an enemy ended up with my pity, what was upsetting was all part of a plan (?).