“This hobble of being alive is rather serious, don’t you think so?”
― Thomas Hardy, Tess of the D’Urbervilles

This post is in response to Helen Razer’s article in Crikey, which if I read it right, lamented too many adults – including critics – take too much from TV and books for children and warns of the dangers of attributing meaning to everything. Here is an excerpt:

Dr Who is a reasonable thing but it is not a Complex Text. Of course, children cannot really be blamed for our grown-up intoxication by their lolly-water. We have no one to charge but ourselves for the embrace not only of items intended for consumption by children but for our demand for childish techniques in ‘adult’ entertainment.

I don’t have the vocabulary for a full throw down against Razer. Furthermore, I agree with her warning against the infantilisation of culture and critique, as well as her warning on the quality of what we consume. But there are big dollops of but in there. As others argue, her stance on the value we see in some cultural productions has flaws.

Once upon a time

The notion of entertainment for children is a construct of 18th European century thinking. Once upon a time, entertainment was meant for everyone – or was made available along class and gender divisions rather than categorised by age or maturity. This western world is now divided up: babies, kids, tweens, teens, young adults, young people. Someone else decides who is meant to get what in a dis-empowering way. These groups mainly exist so businesses can market and sell to them, and so governments can support, ignore, identify, penalise or otherwise treat groups as they see fit. As Alison Croggon argued this division of literature (or film or television) is seldom related to the intent of the author or the text.

Also, just because a story is about kids, or features kids as main characters, doesn’t mean it is for kids, or all kids, eg: Empire of the Sun, Leon: The Professional and Taxi Driver are three random examples.

Doctor Who and Tess of the D’Urbervilles

Razer specifically mentions Doctor Who. The argument can be made that it is a television program created for families and never ‘just’ kids. I understand too, how sometimes we see complexity where it doesn’t exist, because people are problem makers, yet with this program I disagree. Doctor Who is complex. It is not only a text, and nor does it posses the luxuriant language of say Tess of the D’Urbervilles, yet I am not alone in reading meaning and complexity in both. Furthermore, I don’t think I am infantalised for this or endangering the world.

Doctor Who, which is written and created by adults, is worthy of analysis by adults, as is most Art. In addition, there’s little particularly childish in Doctor Who. Variously it deals with exile and genocide, war and refugees, class struggles, technology, medicalisation, superstition, fascism, autonomy and freedom, political structures of every kind, race, time and death. Sometimes even bubble wrap is deployed to explore notions of Otherness, but why not? Are these themes somehow not as worthy as those depicted in Tess of the D’Urbervilles?

“Did you say the stars were worlds, Tess?”
“Yes.”
“All like ours?”
“I don’t know, but I think so. They sometimes seem to be like the apples on our stubbard-tree. Most of them splendid and sound – a few blighted.”
“Which do we live on – a splendid one or a blighted one?”
“A blighted one.”
― Thomas Hardy, Tess of the D’Urbervilles

Tess is a book which deals with young people and their troubled lives as much as it deals with industrialisation, class, wealth and religion, morality and sacrifice. It is an important novel beautifully written. Doctor Who certainly can’t compete with Hardy’s ethereal evocation of landscape and nature. But I’m not asking Steven Moffat or any of the other writers and the directors to try. However, it doesn’t mean I can’t be as touched or moved or entertained by a family television program as much as I am astonished by Hardy’s prose. They both work differently. 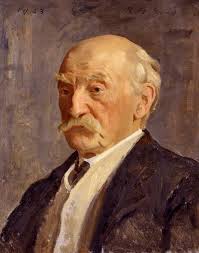 Thomas Hardy. Author, not Bane from Batman. Looks a bit  Gallifreyan though

So, Who is not childish, except for when the characters are. Or it is childish if we accept that all SF is a kind of dreaming about the future, (and the past). From that idea, the argument can be made that all creative efforts are childish, including those by the rightly esteemed Thomas Hardy.

“You, and those like you, take your fill of pleasure on earth by making the life of such as me bitter and black with sorrow; and then it is a fine thing, when you have had enough of that, to think of securing your pleasure in heaven by becoming converted!”
― Thomas Hardy, Tess of the D’Urbervilles

I wonder about class. People have always had their bread and circuses, while the ruling elite had their private chiaroscuro murals and oil paintings. If the Academy is to take things for children seriously because the certain people enjoy them, is that the elite going low brow? Or, are the SF bread and circuses being elevated in their importance?  Or is it neither because works by adults can be critiqued no matter their intended audience?

I don’t mean all things adults create are equal. Like Helen Razer, I believe the idea that Everything is Awesome shouldn’t apply to cultural production.  Art is not democratic and there is a place for experts to sort wheat from chaff. Yet as many note, technology has enabled the democratisation of production (given that access to technology is a privilege). Almost any person who writes something can have it spread far and wide. Even me. Yet online, same as in the rest of the world, often what is popular is not what is good.

Helen Razer: But what is not okay is the shit this worship of the idea of childhood is producing for adult consumption.

Although it’s like shaking a fist at the wind, like Razer, I rail at the influence of the average in the world. Then I remember the world is mostly average. For every startlingly moving tome on the transitory meaning of existence in novel form, there are not Fifty Shades of Grey, but tens of thousands.

Unlike Helen Razer though, I don’t necessarily sheet this all back to writing for children or the infantilisation of culture. There have always been readers of the average. Penny dreadfuls had a market and their (post post) modern equivalent do now.

“…I feel I don’t want to know anything more about [history] than I know already. […] Because what’s the use of learning that I am one of a long row only-finding out that there is set down in some old book somebody just like me, and to know that I shall only act her part; making me sad, that’s all.”
― Thomas Hardy, Tess of the D’Urbervilles

The question of whether those undertaking critical engagement should poke the popular with sharpened Aristotelian analogies is a different matter. Perhaps it is a Feminist and post-colonial issue, since the Academy has historically dictated whose writing is worthy and the Academy has historically been full of old, white men with selection bias issues. Even though, as Dale Spender was the first to point out, women invented the novel.

However, I doubt academic skills will be weakened for tackling YA or fantasy, good or bad. I believe there is intellectual space to undertake criticism, defend against infantilisation, and read Jung or Nietzsche into BBC family television programs.

“Do you know that I have undergone three quarters of this labour entirely for the sake of the fourth quarter?” ― Thomas Hardy, Tess of the D’Urbervilles

Is our culture, obsessed as it is with self and self-expression, one giant Disneyland, because YOLO? If it is, I don’t necessarily blame youth directed literature or family television.

I apprehend the dangers of a babied society. When complex political issues are reduced to slogans so politicians can attempt to remain ‘on message’ even when questioned by Leigh Sales or the occasional scripted US comedian, means we are in danger. Such slogans, being the intellectual equivalent of I Can Has Cheezeburger without the whimsy, hide the fact our freedoms and rights are being eroded and many don’t care or know.

This infantalisation could endanger our capacity to undertake critical analysis. It may degrade abilities in detecting nuance as we are confronted by bland-washed corporate ‘messaging’. It reduces our readiness to question what we see in the media. It could mean we are powerless to do anything about all of this, blunted and stultified as we are under so much that is unworthy of our attention. Or this has already happened and Helen Razer is a dose of medicine that shocks sick systems?

But as far as I can tell, there are still outposts of seriousness left to combat the corrupting influences of the mediocre, as well as corrupt adults, just as there are outposts of excellence in the arts. For every Twilight there are writers of books of genius, power and magic that provide transformative and transcendent experiences, for young and old alike.

In the end, adults paying critical attention to programs like Doctor Who are not the enemy. Some of them are perhaps, like me, looking for reassurance that individuals – no matter how young or old, erudite or lowbrow – still matter. And for that we could do worse than watch this program.