After  the wrongness of Kill the Moon, Mummy on the Orient Express is back on track (ah, I make me laugh), but a bit odd. It’s like every episode Clara or The Doctor have to work each other out, even though they have all their combined history: for instance, Clara only now realises he lies. It is very much like they are strangers.

Not only that because the train looped and we ended some way back. Clara is now misrepresenting Danny to the Doctor; and the Doctor is either ignorant of this or too relieved she is staying to call her on it. Stuff is still wrong. Nothing has been sorted. Typical of train delaying tactics. Probably. 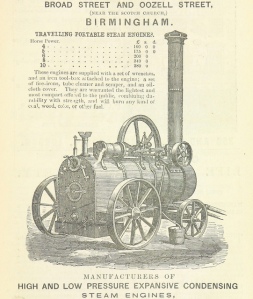 Design for the Orient In Space. Made in New New Birmingham, two planets over from New, New York.

I want my mummy

I think we all get that The Doctor is a new version of himself. But writers, he is still himself. He should remember and Clara should reflect on this, because we all go it. Unless this is a writer thing. There have been different writers, and each episode writer is writing a new Doctor, but that is why Steven Moffat or any other series producer is there. To ensure continuity of plot and arcs, but also continuity in character (as far as it can manifest in a story about an alien shape shifting time traveller). So enough with how different The Doctor is, because really, mostly I’m seeing somebody congruent with Tom Baker’s Doctor and the 9th, 10th and 11th Doctors. Mostly. He even had lollies in a cigar case and slightly faulty Psychic Paper. Also Peter Capaldi’s playful ‘young’ vibe, whether he’s dancing around in circles drawing (probably calculations) on the beach, or the instances of humour are as honest as Matt Smith’s world-weary ancient schtick with Amelia/Amy.

Effecting the Voyage of the Damned

I had suspicions this would be a Starship Titanic episode with The Doctor leading plucky/annoying survivors across the wreck of a train in space as they escape a mummy or two, while he auditions Clara replacements. This time the train isn’t about to be ditched for insurance, but rather, its passengers are gathering to solve a problem, or be experimented on. A bit like Big Brother, only entertaining. 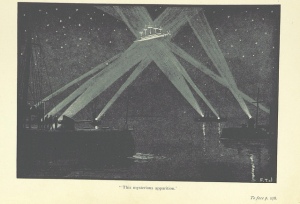 Anyway this is like Voyage of the Damned, but mainly only aesthetically. I often harp on about the writing, because I’m all about the words, but set design, costumes, lighting, even the voice over cast, do a lot to carry stories in Who, especially these days. A particular shout out to the Bubble Wrap monster joke in this episode. Ah the good ole days.

So the v/o was very Titanic, kind of fake cheery, and the officials were useless or weak, again, a bit Titanic, until The Doctor gives ’em a bit of a rev up in typical fashion.

The lighting was especially good. It was all yellowy gas light train car, then aseptic cold white light in the lab-car, and then an emotively lit outdoor scene in a place that looked like a late afternoon near the 29th New York.

While I’m at it, this season seems to have spent more money on digital effects and it shows. Alien beaches look a little more alien when the light is a different colour. Pretending every world or place has the kind of sunshine or atmosphere of a Welsh gravel pit is a little repetitive, but changing the colour, inserting a digital backdrop and making actors look like they are standing under an alien sun is much better. In addition, phasing mummies look more believable if they phase while being miniaturised and inserted in a Dalek is suddenly more convincing, even if the memory bank includes a bunch of clear plastic hoses. Again, I have affection for those kind of effects,  as well as the shiny, shiny new sort.

The only thing is Astrid Peth was far more useful as an assistant than Clara in these respective episodes. Astrid saves The Doctor, Clara delivers him the next potential victim.

The Doctor speech at the end is important. He explains his modus operandi and how some situations require a decision must be made and sometimes no decision is a good one, which is a speech that would’ve been useful on the moon. Again, both their comments on addiction were interesting too.

I was going to be critical of how quickly the mystery was wound up, but he did say 66 seconds. Everything up until that point was so he could work out who is targeted so he could become the next victim and then save his own life in a little more than a minute. So he sacrificed his reputation by lying or pretending to lie, to put himself in danger.

But they weren’t the real sacrifices. Nup. The Doctor, in explaining the denouement, omits an explanation of their intercom conversation, where she doesn’t shut up and he is talking to her and listening to warnings. He never tells her all that results in the deaths of the catering staff. Their conversation killed them and The Doctor doesn’t tell her. He takes the burden of that on.

Again, they are lying to each other and I can’t see anything good coming of it.

As typical under Steven Moffat, the deadly menace in the Legend of the Foretold is more akin to a victim and has its own mythology and rhyme, which all combine very effectively. About 100% more eerie and dangerous than the Blitzer thing in The Caretaker. It was truly well done, and a welcome change in aesthetic from the ‘mind eating’ monsters of Time Heist and the jailed Minotaur of The God Complex. Interesting too that it was a soldier. I’m sensing a theme that needs to be explored further, regarding Danny, toy soldiers and veterans. I mean Amy’s imagination as read by aliens, literally remakes Rory into a plastic fake, but real Roman legionary. Clara is asked to marry the Emperor of a neo-Roman space empire, and is then with Danny, former soldier, who she and The Doctor encouraged to be a soldier. Hmmm.

However, to get back to the Foretold. As gruesome as the Legend is, it’s a smokescreen of an unknown pulling the strings for some ulterior purpose. It turns out Gus is somebody The Doctor has been putting off encountering. Is Gus linked to Missy? Or a different kind of enemy? A call back to someone we are familiar with, like The Master, or someone new? Or just a name embedded now for future series, a bit like how River Song is introduced way before her significance is revealed.