WriteSpace: it’s everything I had imagined a day devoted to writing to be. There were desks, comfy enough chairs, food and beverages, natural light, power, a thoughtful selection of writing resources for inspiration, and much kind service from our host.

Quiet tapping on laptops is comforting. We happy few are getting work done, or at least our fingers are getting a work out. The view from the high windows is distorted by the old glass, but no fly screen, so the building next door glows white and bright and wavy in the morning sunlight. Above the roof line next door, the sky is the deep azure of early spring. Other buildings are glimpsed through the arched window, older red brick and also concrete and glass.

Our host is convivial in her whispered efficiency. The atmosphere is welcoming and everyone respects the hushed ambience. I imagine this is a little like what quiet convent/monastery would feel like, if we were all religious folk 1000 years ago, only with less dying of the plague and more of the slightly too effective air conditioning, handy sources of electricity and free wi-fi. 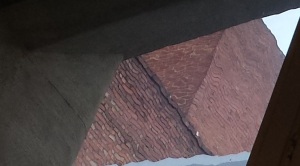 Today wasn’t meant to be about embarking on a new story, but I had a very clear dream the night before, inspired by recent news reports and my own memories all jumbled up, as brains are wont to do. It began as a mystery or literary adventure, but quickly became a bit of a horror-mystery. By 11am I’d written more than 700 words, had a cup of tea and enjoyed some very enticingly scented toasted fruit loaf with butter.

So far, so productive, including the first draft of this very blog entry.

See! I told you, it is all about new environments stimulating creativity.

Sandwiches and also a tasty quinoa salad are revealed for a quiet lunch; no one seems to stop working. Too focused.

I haven’t looked out the window in a couple of hours. But there are clouds that make the white building opposite wavy and grey, instead of wavy and glowing. During, and also after lunch, I happily stop on my new story, to complete another which has been a bit of a hurdle for me. I had left its ending in forlorn notes, but now it is all resolved in actual sentences.

As for the new story, I have 1300 or so words, but I don’t know where it’s going yet or how. Not sure where it will end, apart from darkly.

When the sun breaks through the clouds, the stone of the building I’m in that surrounds my window is golden in the afternoon light.

I don’t know if it’s significant but both stories have their source in dreams. Weird hey?

Three floors below us, the muted noise of city diners enjoying their CBD al fresco lane way dining experiences floats up. I am not jealous.

The main flaw in today’s effort was I forgot my mouse. I do prefer a mouse when on a lap top.

I am suddenly aware of a clock ticking.

It’s mid afternoon, which means home-made biscuits and hot English Breakfast to dunk them in, as sounds from a singer and her electric guitar climb together to reach us from the restaurant, or perhaps just busking on the lane. She sings a plaintive Sweet Child of Mine. Later in the day, others reveal they heard her sing a different song repeatedly. I hadn’t noticed.

My new story is stalled, so I go back to an ancient story that needs a good rewrite, edit and perhaps more words, to become the scaffolding of something else.

How the time flies, as the room’s ticking clock fades in and out of my consciousness.

I realise leaving my mouse behind was a blessing in disguise. My laptop became more like a typewriter. I made myself consider one document at a time and there was less fussing with folders. If I needed to check anything online, I used my phone.

There’s my wavy window. Up a bit, over a bit. That’s the one.

Through the other large window, the sun, in reflecting the dirt and smog, now obscures the view.

My window (I now think of it as my window), remains faithful by providing me a view of the changing façade next door. Now in shadow, it is multi-toned. It has creamy walls above and below, punctuated by darker grey ledges. The view remains wavy though, through the natural distortions of the aged and smudged, clear glass. I wonder how old it is.

Nothing is ever as it first seems, is it?

There is both more and fewer people here than when I arrived. None of us speak. We don’t need to. I like this most of all.

Apparently, there are regulars. I like this idea as well. Regular strange familiars sharing the silence.

By  4pm-ish, the Great Silence is broken-ish by the remaining writers.

Things have been achieved. By me, these things include:

If you think changing where you write might help you kick-start something, DO IT. Even if its rearranging the room you write in, or moving from a study to the lounge, or outside, or a cafe or a local library. Try it and see. Set a time and a day and make it about the writing. If you are in a writing group, try it with them.

If you are particularly interested in Melbourne’s WriteSpace, I do recommend the experience. Please check for the next lot of dates at the website here. Jen Squire, the host, is friendly and can help with any questions or dietary needs, as refreshments are provided.