Well isn’t the Zygon Invasion right up to the minute with talk of radicalisation and kids, and strangers amongst us in the most urban and mundane of settings? Current but also old, old news, because it was ever thus. Regardless of the aliens, this is a cold war spy thriller invasion tale, where the paranoia about which operative can trust which operative is on a global pan species scale that pits neighbour against neighbour, literally.

The episode poses questions of trust, of the familiar made the enemy, it inverts the usually acceptable order of things. Not quite as much as part of the current global reality, but enough to be slightly disturbed by The Doctor trying to question two kids, a who dress a little like the Shining girls, in a play ground.

As I said in my last post about this episode, the question of Otherness was raised. But what this episode did was make it political. Because our freedoms, our very persons, are the locus of political activities. Theft of identifying facts about us is bad enough these days, but theft of our bodily autonomy is up a scale. Zygons take what we look like and how we sound and dress and act to change the world to how they want it, stuff the rest of us.

If she drowns she’s a Zygon and they’re safe, and if she lives she has special Zygon powers and  you are so not safe.

Thus, the questions raised are how far we can agree with the movement to recognise Zygon personhood, while deploring their methods and ambitions to take over the world? Or are they truly monstrous, and thus fair targets, even when look like us? Can there be a treaty after an invasion? If someone steals your identity, is it right to feel offended and betrayed when the thief follows through with their plans? And how free are you, when your welcomed into a new world, but can’t be everything you can be or were? That seems to be a pressing question right now, further more, does it matter? Is it enough to be safe, even if you can’t have what you had in the past?

The bit I liked, which again is a call back to Maisie William’s Ashildir, is this transformed Osgood as the embodiment of peace as both human and Zygon. She is more than what she was when just a UNIT scientist. Furthermore, she is right to wear the question mark, because she, like The Doctor, has more than one identity, but more especially, because she is an enigma. I mean the least understandable concept but most needed one in war, is peace.

So the Doctor has saved the peace, but can he keep it (her)? Can Osgood restore balance when so many have rocked the boat? 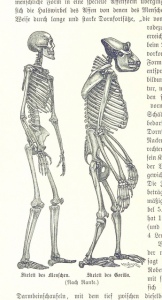 Example of an Elizabethan Human Zygon Anatomy Exam Papers for the Most Learned of Doctors.

Before the turn, near the end of the episode, it felt like Clara was a resistance fighter, symbolised by her literal journey underground. But we should have guessed – her hand could work the Zygon matrix in the elevator – she was an underground fighter. This Clara is the radical Zygon enemy. Yet again Clara takes on another identity, but instead of saving The Doctor, she is trying to destroy him. Two good Osgoods are one, and the ‘Human Clara’ is neutralised (or waiting in an egg to be reborn) in favour of the ‘Zygon Clara.’

I imagine the inversion next week, will see something of these identity questions turned upon the Zygons. And I can’t for a minute imagine that Kate Stewart is dead for reals.