The Abominable Bride, the next instalment of Sherlock, aired in Australia. Well I say aired. It was available via BBC Worldwide (through proper pay TV) and via subscription streaming TV and it also screened at selected cinemas for about 2.5 seconds. Needless to say, I missed these.

It’s typical Steven Moffat and Mark Gatiss, self-referential, messing with expectations stuff. Almost all Moffat does these days is tell a story about writing stories. This time he retold old stories in a contemporary milieu and vice versa, using his main character to retell a story in his mind palace, in order to solve a case, and as he does, have characters critique Watson’s versions of events, which are his understanding of Watson. But all this is just a version of Holmes by Gatiss and Moffat anyway. The meta, it hurts.

In real terms the story moved the action forward about six minutes, but it packed in information about how Sherlock sees and experiences the world. It is a linking episode to remind us what happened in the previous series, and to remind us that somewhere ahead, there will be an upcoming series. It was a bit clever and was both closer to the original (for ye olde reasons) and further from the source material (for Moffaty reasons). 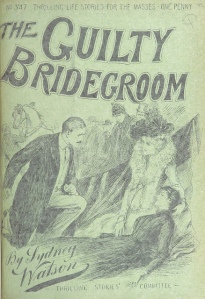 Ye olde book covers say much about modern Holmes. Fashions change but the stories don’t much.

I’ll use this ‘review’ to explain that I resent having to pay for a special episode that’s been part of a free to see television series for (all) its other episodes. It was free to watch then and it should be the same price now.

The company streaming it is owned by Channel Nine and Fairfax. Nine aired the series on its main free to air station to good ratings and this episode’s treatment was a ploy to get people signed up for their streaming service. Both owners need the money, but their ‘service’ will not be able to compete with its main rival. And I don’t even have to mention its name. It’s the global big-un.

Now, you say I can sign up for video on demand but it’s difficult enough watching YouTube with the crappy thing we call the internet in Australia let alone payin-

Sorry, had to pause… for… buffering.

So yeah, I could get a free trial and see the program. But for that they want my details. Why should they get my data and get to pass it to any promoter or sponsor they like? No.

Probably for protesting the Australian internet experience. I’ll wait while this uploads.

Paying for TV, as provided by companies who (currently) provide it for free, tells them that they can continue to debase the free to air system. It encourages the already poor performance in scheduling, running to time, the timely airing of programs and pulling programs and shifting them around or not showing seasons at all – ie Scandal. There are those of us who remember the Australian scheduling fiasco around the last Friends episode. By the time it did air, it was too late. Don’t think I saw it and scheduling has only marginally improved since then. C’est la whatevs.

I could rant about bandwidth, costs, and demographics, but I’ll move onto the digital divide. The gap between the wealthy and the poor exists with ‘proper’ subscription television, and will only increase as free to air television is reduced to news bulletins, stunt weather reports, sport interrupting live betting updates and eternal reruns of out-of-order episodes of  CSI Generic Law Enforcement, MASH, Midsomer Murders, and Antiques bloody Roadshow, which are on all the flipping time as it is.

I know this is all very ‘old (wo)man shakes fist at sky’ and in the grander scheme it shouldn’t matter. But this is business. And the businesses that are Australian free to air stations keep saying they aren’t dead. Yet, they can’t live as they are.

Australia’s public broadcaster, the ABC, reduced downloading by streaming Doctor Who for free within hours of the UK broadcast, which is a lesson Ten could have learned for X Files, especially since ABC found it hasn’t hurt TV viewing figures, and they don’t care about numbers. Nine, who does care about viewers, could have televised a program people were looking forward to, on their station, kinda like they did a couple of years ago.

That would have been something.