I thought I would have more to say about seeing the works of Edgar Degas at the National Gallery of Victoria and maybe I will. However, more time is required to mull viewing more than 200 pieces all together in the first major retrospective since 1988. It’s true that I learned things, both from the art and the lecture I attended. That Renoir called him France’s greatest sculptor, for starters, despite him only ever exhibiting one sculpture which the public hated. But you can visit or look at that up.

You don’t need my second-hand lesson about how Degas was a realist in a time of Impressionism. However, speaking of Impressionism, what links him to that crowd is how many of his portraits are almost featureless. Faces were on the edge of pictures, and drifted off into obscurity, or angled so less of the face was distinctive. Often they were less delineated than clothing (or lack of). I imagined he was preserving anonymity for those who posed, but he does it with his own self-portrait. So I’m doing it too in presenting my view of his work.

People looking at art intrigue me as I wander through the crowd, barely noticed. My Degas Triptych is instructive. The gallery arranged the works meticulously, grouping his nudes and ballet and horse scenes, while at the same time tracing his development as an artist. These three views speak to my experience of some one else’s art. It will have to do for now.

One: Arabesqueing   the View Finder 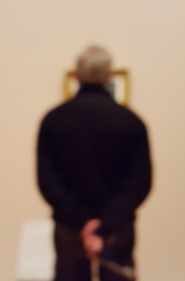