The National Gallery of Victoria is currently exhibiting more than 150 works of art (prints, books, manga, cloth items etc) by the Japanese artist Katsushika Hokusai. Even if you haven’t heard of him, you may know one of his pictures, because it is now one of the most famous and reproduced scenes in the world: The Wave, or as it is also known, The great wave off Kanagawa. And it is not just one picture. In this exhibit it is two of a kind. 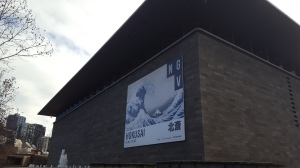 It is nice to stop and to watch people swaying and nodding between both images, comparing and contrasting them like a newspaper spot the difference puzzle. But beyond this area, there are different sections, some dedicated to his views of Mount Fuji, others to his illustrations of ghost stories, and depictions of flora and fauna, and the seasons. There is a kind of serenity to them, even when the woodblock prints show wind-tossed people losing their documents and hats. 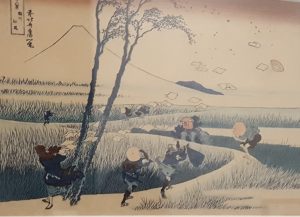 This artist knew about silence, and absence and I find myself staring at the areas he leaves blank. Some of these indicate air, the horizon, or mountains, ocean or a combination, where you can’t be sure. Sometimes the colours fade, and only a boat or a leaf indicates it is a lake or river, or trees full of cherry blossoms. This self-styled ‘old man mad about drawing‘ knew what to leave out and my eyes are grateful for the rest even as they take in his complete views.

See what I mean? Active rest.

The exhibit is at pains to demonstrate the influence of Hokusai on the likes of Vincent van Gogh, and yes, I can detect Japonisme in some of his ‘flatter’ works, but van Gogh doesn’t do absence. Each and every one of his paintings and drawings are noisy, riotous even with colour, line, emotion and enthusiasm, even if none of his faceless characters communicate with each other. 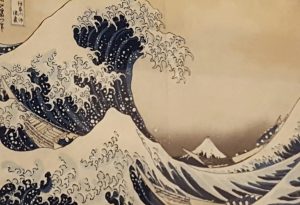 Partial view of one wave.

Like Elizabeth Gilbert’s Yellow Wallpaper there is little at ease in van Gogh’s roiling yellows, framed by tumultuous cypresses below dizzying clouds. Although, I am looking forward to seeing this movement interpreted in the film Loving Vincent, showing at the Melbourne International Film Festival soon.

Anyway, while Van Gogh’s brush races to the landscape and makes it loud and busy. Hokusai is a welcome contrast. He seems to takes in a view, not rush to capture it before the season or his mood, changes.

Hokusai at his own pace.

Or else, all of the impressions are mine. Hokusai was not still, his art stills me. Van Gogh’s works (just for a recent example) elicits all sorts of whirling feelings and associations (and remember, bad teen poetry). And yet I have written a story inspired by Hokusai’s wave. It was even published in 2013 and you can go read it for free here, if you want. My narrator was wrong though. The picture wasn’t anonymous, just ubiquitous. However, with Hokusai there are less feelings and confusion and more clarity, and dreamy wonderment amid the fine detail. Then you look closer and his characters are sailing or riding or walking. They almost always seem to be on their way, or reflecting on how far they have gone. 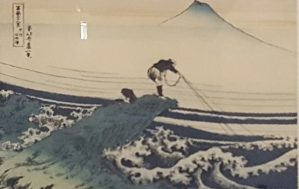 One artist, many waves in front of Mt Fuji.

Speaking about writing, it used to be that I was confounded by it, and how little squiggles could mean words that could be read back and understood to indicate a shared meaning. Yet the more I think about and look at art, the more I’m bemused and befuddled. Reading pictures is harder work and none at all. Hokusai has shown me, or else I have relearned through his art that looking is always inter-textual. He brought his phenomenal skills interpret his culture, and its poetry as well as nature in his works. Now I am reminded it could take a life time to properly see a single image, and yet one could still arrive at a different meaning to the person who sees it next to you, or 50,000 people who see it afterwards. And that’s before any of us start talking about the art to arrive at different conclusions.

I imagine there are valuable sociological and historical readings being made about Hokusai and his myriad images, beyond just measuring his influence on the aesthetics of European artists. They are interesting ways of seeing his work. They highlight his preoccupation in depicting the many facets of an array of Japanese people in their various natural and urban environments, they indicate how people lived and how people imagined, and how some have imagined Japan in the many years since he flourished…. 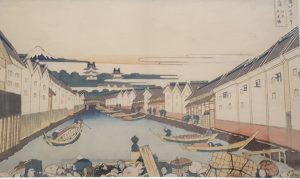 Titled The Bridge. He had a sense of humour.

As for me though, I’m still, reposing, immersed in my dream of Hokusai’s Japan…the rest is history.