A week ago I had never heard of it, but that’s how Melbourne and my social media feeds work these days. Huge art installations appear for a month in Federation Square and we flock to them like moths to glowing bulbs, while they loom in the city-scape like dawn hot air balloons over the inner suburbs in summer. So that’s how I happened upon ARBORIA (their capitilisation) while on the way to the National Gallery of Victoria’s Drop By Drawing afternoon of sketching.

Exterior: temple to colour on a dull Melbourne day.

ARBORIA is a luminaria by Alan Parkinson of Architects of the Air, which their website can tell you if you visit. 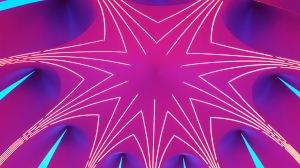 Temple to colour, looking at the ceiling.

It will also tell you about its audio inspiration from Ecuadorian rain forests and its visual cues from York Minster. But they are rather dry words that don’t convey the intensity of the actual experience.

Being inside this air-sculpture is like swimming in pigment. At times it is overwhelming, especially in one room that I couldn’t decide whether it was red or orange. I know that sounds weird. 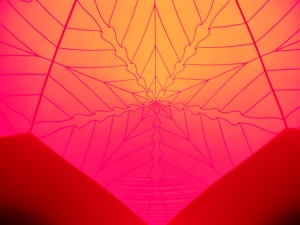 This sculpture-building consists of bits of coloured plastic zipped together like a series of tents but constantly inflated – a grounded cool air balloon.

Outside is dull but inside is weird bright, colourful dark.

The entire structure is an organic shaped labyrinthine, cave-tunnel cathedral-temple to…nothing. There is nothing inside except its wanderers.

The source of the colours of each room is from filtered natural light through coloured panes of plastic. All the work to make each space inside happens outside. The only things inside are the preconceptions we bring.

Organic structures of the green room.

Thus, the colours are intense as a say Kel Kathryn Barton extravaganza  but there is little detail draw focus. It both meant more and less than a painting. Or I was an virus introduced to a neon psychedelic trip through a soft but inert alien body. 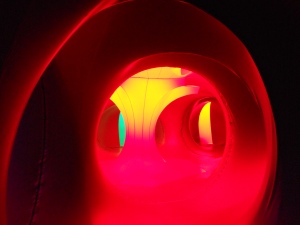 As weirdly intimate and womb-tomb organic as any Barton work.

As a space it silenced some, and sent some small children screaming and careening off the curved rubbery walls. Throughout the tunnels and off the main rooms there were nooks I could stand in (so about 150cm high) that gave the illusion of privacy for many couples. 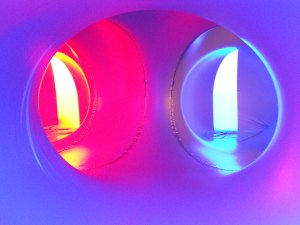 Which way to go?

The central area was a large high ceiling-ed ‘temple’ space, while there were the smaller ‘leaf ceiling’ rooms in green, blue, and orange, off other tunnels.

Leaf ceiling detail above a red nook, like an open flame beneath a hot air balloon.

Some probably found it easier to process through filming it through their phones than otherwise experiencing it. Can’t say I did much different. We all need filters for experiences.

Blue shadows and a glimpse of something more.

The sound-scape of natural forest noises ebbed in an out of consciousness depending where you stood or sat, and fed into the general enchantment and stimulation of the space.

Like Gandalf in Moria, I have no memory of this place, but I took the picture.

Looking back at the pictures I took, which are unfiltered, the colours of one area bleed and fuse into the next. Blues turned into purples, and I can’t remember where the yellow was. Thus, what seemed so certain in my direct experience at the time, is now hazy in my memory.

Colours are intimately linked to how we see (if we can see) and therefore how we think. I’m not just talking about people who see Bach as green, but how our language is littered, or rather, saturated with colour and the meanings we ascribe to them.  Thus, this space is as meaningful and emotional as any piece of art. The sun brings the light, we bring the meaning, an artist created the shapes of the space.

I want to know what it would be like without other people, and waited longer in some areas for groups and families to pass through.

It was strangely calming while also verging, at times, into anxiety inducing, which is why the nooks were welcome and comfortable spots to rest while contemplating this weird, artificial-natural bubble world. 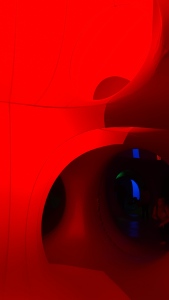 It was like wandering through the ventricles of a massive empty heart, but there are so many metaphors and similes for what this experience was, you can imagine your own if you go.

In the end, it was itself. 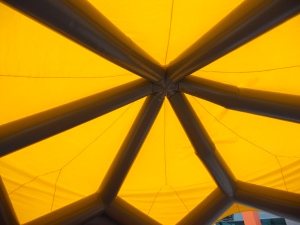 From the outside it was as structural and engineered as any bouncy castle, all spikes and naff trickery, and air pumps and exit signs. The art was inside the artwork, which was a nice change from reading surfaces.

Tickets are from ACMI and include discounts on the Wallace and Gromit gig there if you purchase both. You must remove shoes before entering. It is open until 8pm at Federation Square and ends on January 28.