“To survive, you must tell stories.” – The Island of the Day Before

How can I attempt to  examine a 10-year-old film franchise? By adding a pinch of psychology, a dose of myth making, and then admixing a teaspoon of Mary Shelley’s Frankenstein. More importantly, by using the works of Umberto Eco to prove my thesis, because, “any fact becomes important when it’s connected to another,” (Foucault’s Pendulum), and because the Avengers are “everywhere, aided by the fact that they [don’t] exist,” (Foucault’s Pendulum).

“The real hero is always a hero by mistake; he dreams of being an honest coward like everybody else.” – Umberto Eco

Imagine a war, during which a scientist attempts to make soldiers stronger. This scientist experiments on a weedy kid familiar with myths and elements of Christianity, who’s been repeatedly rejected for the war effort.

“How clear everything becomes when you look from the darkness of a dungeon.” – Foucault’s Pendulum

That’s how Captain America was made right? Except it didn’t work. Howard Stark’s experiments failed and Steve Rogers is put on ice. The war goes on.

“…the whole world is an enigma… made terrible by our own mad attempt to interpret it as though it had an underlying truth.” – Umberto Eco

In his mind however, Rogers is not Frankenstein’s Monster fled to the Arctic, but Captain America, hero of his own war where he battles his mythic many headed-Hydra instead of Nazis.

“The order that our mind imagines is like a net, or like a ladder, built to attain something. But afterward you must throw the ladder away, because you discover that, even if it was useful, it was meaningless.” – The Name of the Rose

In the labyrinth of his own myth-making, Capt can fight, but never be finished, as the very nature of Hydra means it cannot be defeated.

The monster in the maze

Captain America’s world is circular and repetitive. His enemies (like Hydra) are aspects of himself, and he can never escape them.  Inside his world, vengeance against the heartless Stark  industrial complex is his purpose and death is the enemy; like Hydra it keeps appearing.

“Everything is repeated, in a circle. History is a master because it teaches us that it doesn’t exist. It’s the permutations that matter.”- Foucault’s Pendulum

Rogers loses his best friend Bucky Barnes in the real war, but resurrects him as the Winter Soldier, transforming his friend into his Shadow self.  In this form Bucky performs Rogers’ ritual vengeance by killing Tony Stark’s parents. And, this explains how Rogers already knew this. However, Bucky also serves another purpose – as a reminder of his lost youth and of his outsider status.

“I belong to a lost generation and am comfortable only in the company of others who are lost and lonely. ” – Umberto Eco

Of gods and monsters

Rogers is nothing in his fever dream without his saviour complex…even as his world becomes more incoherent, as it is peopled with increasing numbers of ‘alien-Norse gods, tricksters, mind control, living robots, advanced tech, wizards,  talking trees and raccoon pilots.

Why does Rogers’ fantasy begin with Iron Man? It’s about world building – it’s the same reason the Bible starts with Genesis. Stark Snr is Rogers’ god/maker; the Frankenstein to Rogers’ Monster. It thus makes Tony Stark a Jesus figure. But Rogers can’t have Tony/Jesus usurping his invented world…hence all the attempts to obstruct Stark in the first Iron Man films, as well as the friction between Cap and Iron Man across all films.

“What we become depends on what our fathers teach us at odd moments, when they aren’t trying to teach us. We are formed by little scraps of wisdom.” – Foucault’s Pendulum 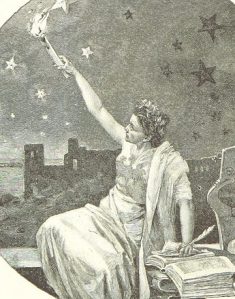 Rogers’ relationship to the Starks also explains Pepper’s long-suffering but increasingly peripheral Magdalena characterisation. If Pepper loves Stark she’s at risk, and if she doesn’t she is sidelined (safe from Cap’s attention). Cap’s invented women are generally powerful, but tropes: Wanda is a witch and Black Widow is a kind of sexually manipulative assassin. As such, both are shifty, always changing sides but generally on Cap’s. Peggy Carter is Rogers’ real life girl friend magnified and there to make Rogers into Captain America. Like Lia in Foucault’s Pendulum Carter is practical and sensible compared to her partner’s heroic/dreamer persona.

” All sin, love, glory are this: when you slide down the knotted sheets, escaping from Gestapo headquarters, and she hugs you, there, suspended, and she whispers that she’s always dreamed of you. The rest is just sex, copulation, the perpetuation of the vile species.” – Foucault’s Pendulum

The Carter/Cap relationship is never consummated because neither is real. Having a relationship would risk Cap exposing his made up persona to human-scale vulnerabilities when he is at home in a heroic age matrix.

What’s so civil about war anyway?

A sign his inner world is insecure, is how Cap’s role evolves from volunteering to defend law and order and the ‘American way’ to transgressing these values. As the Stark experiment failure intrudes the Cap persona spirals his world a self-created civil war, where he fights his invented characters who are aspects of himself. He is godlike, strong, smart, angry, mystical, visionary, an alien in the world, and a man out of time. Thus Cap is Thor, Iron Man, Hulk, Banner, Strange and Wanda, Vision, Guardians, and the Winter Soldier.

“To tell the truth is like leeching one’s own heart.” – Foucault’s Pendulum

In reality, aspects of his personality are attacking each other. Or, it is reality disrupting his fantasy, hence he ‘fights’ this. His Civil War ends in a draw, but his destructive tendencies bring on war in Wakanda (death of a father) as well as Ragnarök in an effort to defeat the his own self-sabotaging ways (hence families fighting themselves). Cap has another father/Stark/god figure (Odin) defeated but it is not enough, as this powerful father archetype is transfigured into a universe killing figure: Thanos. Thus, his entire rich inner world is imperiled in the Infinity War.

“Do not expect too much of the end of the world.” – Stanisław J Lec quoted in Foucault’s Pendulum.

It matters that half the population are at risk of genocide by Thanos, as his plan again represents the friction between the real Rogers and the invented Captain as well as a son fighting his father. Of the two sides only one ‘half’ can survive.

“As long as you remain in your private vacuum, you can pretend you are in harmony with the One. But the moment you pick up the clay…you become a demiurge, and he who embarks on the creation of worlds is already tainted with corruption and evil.” – Foucault’s Pendulum

If the Titan Thanos is a self-created enemy, like all enemies of Cap, his Infinity Stones are the Stark experiment ingredients that are distributed across Rogers’ made up worlds but also represent his heroic persona. Thus, he can conquer time (remains youthful), space (travels the world), and knowledge, etc. In myth, the Titans were gods before the Olympians. Cronus and the other Titans were overthrown by his children (Zeus, Hera, Demeter and Hades etc).

“Having come from the light and from the gods, here I am in exile, separated from them.”- Foucault’s Pendulum

With the Infinity War lost, Cap is moved closer to the real Rogers but survives, as he must for his universe to exist. The answer to fixing his world is that Rogers makes Thanos a Titan. This means that while he is a god, Thanos can be defeated, by his symbolic son, Cap. In a sequel Rogers will need to collect the surviving aspects of his heroic persona (the stones/surviving heroes), and fully integrate his feminine side as Captain Marvel in order to wake from his world or overcome Thanos.

“What is life if not the shadow of a fleeting dream?” – Baudolino

Sorry, this was a long bit of bunkum, and as Umberto Eco writes, it’s easy to be “led astray by rationalist thought,” even applied to an imagined world. Anywho, thanks for reading a whole lot of argument using made up stuff to critique made up stuff. I’ll leave you with this:

“There’s nothing in this world that demands more caution than the truth.” – Foucault’s Pendulum