I spent a part of my Friday off at The Ian Potter Museum of Art, where Associate Professor Andrew Jamieson from Melbourne University delivered a lecture on the Nimrud ivories in the university’s Classics and Archaeology Collection.
Archaeology as the biography of objects

The three delicate pieces are more than 2,500 years old and were discovered at Fort Shalmaneser by Max Mallowan and cleaned by Agatha Christie. These three were found in storerooms amongst thousands of others, while more were found dumped in wells. It is thought they were discarded when the Babylonians and Median alliance overran the fort at the end of the Assyrian empire.

These three ivories were from Phoenicia. They were made probably in Sidon from imported African elephant tusk and were looted when the Assyrians attacked the city. They were brought to Nimrud during the time of Sargon II and were lost once more to war. Thousands of years later and many of the Nimrud ivories may be lost again to violence as war continues in Syria.
Context in Melbourne

These three small ivories ended up in Melbourne as they were gifted to the university in acknowledgement of the financial support provided to British excavations conducted after WWII. Assoc Prof Jamieson rightly explained this would not happen now. Then again, many ivories ended up in a museum in Aleppo; their status is currently unknown.

As impassioned and interesting as Assoc Prof Jamieson was, the best bit was combining the context delivered in his lecture with actually seeing these items. The ivories are a bull (part of a chair), a figure bending a papyrus stem that would have been a furniture inlay, and a depiction of papyrus that would have formed the base of a stand. 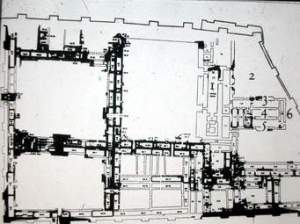 Fort Shalmaneser, or what is left of it.

Centuries carried this way and that, looted, saved, buried, drowned, rediscovered, dried, reassessed, preserved and encased in protective padding and secured in a museum half a world away from their origin: these items can only ever be considered provisionally safe. Perhaps for decades or centuries, but who can know.

There are pyramids and Lamassu (Assyrian winged lions / bulls) but fragments are equally priceless and telling. Ornamental ivory that can fit in my palm has had a history as complex as any monumental architecture.

People have always valued beautiful objects. These ivories were looted precisely because they were already considered valuable, as were the items they decorated. People thousands of years ago had skills and delicacy of touch as sophisticated as any artisan now.

The bull’s marks over his face, head & neck, & his drilled eye socket are mesmerising in their delicate detail.

How easily items we value can become the detritus of others. Cities thrived on skills to carve ivory, Egypt banked on exporting it, and Assyrian kings so prized the ivory inlaid timber furniture of the Levant there are stone relief carvings depicting their armies carrying it to their citadels. But it all becomes rubbish, and centuries later, archaeologists sift through it to find value again.

Lamassu protective deity, not quite protective enough for the Assyrian Empire.

I think of elephants and rhinos, hunted even now for ivory for trinkets and powders. By the time of the Assyrians their own local elephants had been hunted to extinction.  I don’t want extinction to be the price we pay for things that could end up dumped in a well. I have come full circle, back to the mammoth exhibition at the Australian Museum in Sydney I wrote about recently.  It’s alarming to imagine some kid centuries from now in a similar museum looking with wonder and sorrow at skeletons of elephants because there are none left alive.

I didn’t know what I expected to come back with when I attended this lecture, but a meditation on the fragility of human achievements, the obsessions humans have with things, and what we do to obtain them, how we value them and discard them, on top of how nothing in almost three thousand years has changed in terms of cycles of destruction is a bit overwhelming. I am sad for the past, but archaeology has made me even sadder for the present, and anxious about the future. The only answer, I suspect, is to keep on digging.