The Rocks is likely the least romantic name for that area of Sydney that now maintains a certain pride in its varied history. From location you’d least want to end up to a tourist destination.

Step out of the MCA to see The Rocks.

Thus, I ended up at The Rocks like any tourist when I was in Sydney. It has stone buildings, cobbled lanes, steps everywhere, and glimpses of the Harbour.

The Rocks: old stone, and a view of the Sydney Harbour.

It also has a museum, which I visited.  I learned about hard times, bubonic plague, and once more, how little survives from the past. Some pieces of clothing, broken bottles, a chipped headstone, and some ceramics, some carefully preserved letters and drawings.

Francis Greenway, the convict architect who designed this street, The Rocks.

This museum showed me, in its convict built building, just how ephemeral our ephemera is. It is a lesson I see repeated everywhere. The items we value for a day, a decade, or a lifetime, end up broken and ruined, the wreckage of time, until once more, someone puts them on display under a spot light.

Some bits & pieces surviving from first English settlement are more intact than others.

As a teen I had watched (and read) Playing Beattie Bow, a time slip YA adventure set in contemporary Sydney and early Sydney. It’s probably my main reason for wandering the narrow lanes and foot worn stairs.

Up to The Rocks via well-trod steps.

I don’t understand my attraction to old things and places, especially since I am often familiar with their history, and how this now much acknowledged Convict First Fleet history, has long masked First Nations histories.  We can marvel at the ‘first house’ in Sydney all we like, but the Gadigal People had been living in and around the harbour for thousands of years.

‘First house’ but then no one asked the Gadigal People.

So convicts and English soldiers brought with them their history, language, culture, and ways of doing things. They also brought violence, with Governor Lachlan Macquarie declaring war on the First Nations Peoples. (Macquarie’s bronze statue, in Sydney’s Hyde Park, has got to be one of the most poorly constructed and ugly pieces of work I have seen. Well done.) These people also brought their diseases that thrived in the squalor of The Rocks. 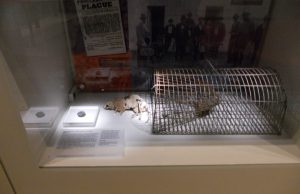 For the public health-minded, Bubonic Plague came to The Rocks. This is not a survivor.

The squalor is gone now. The Rocks Museum pays tribute to all of its history, the ugly, the difficult, the Gadigal history and European one. After contemplating the past, you can sit, as I did, in the courtyard of a French patisserie located in a 200-year-old building, and watch the brightly feathered lorikeets flit from tables to the fig tree while kicking your feet against the cobbles laid by convict labour.  Because it is Sydney.