I left it a bit late to see Baldessin / Whiteley Parallel Visions at the National Gallery of Victoria but I made it at the last minute and was pleasantly surprised. 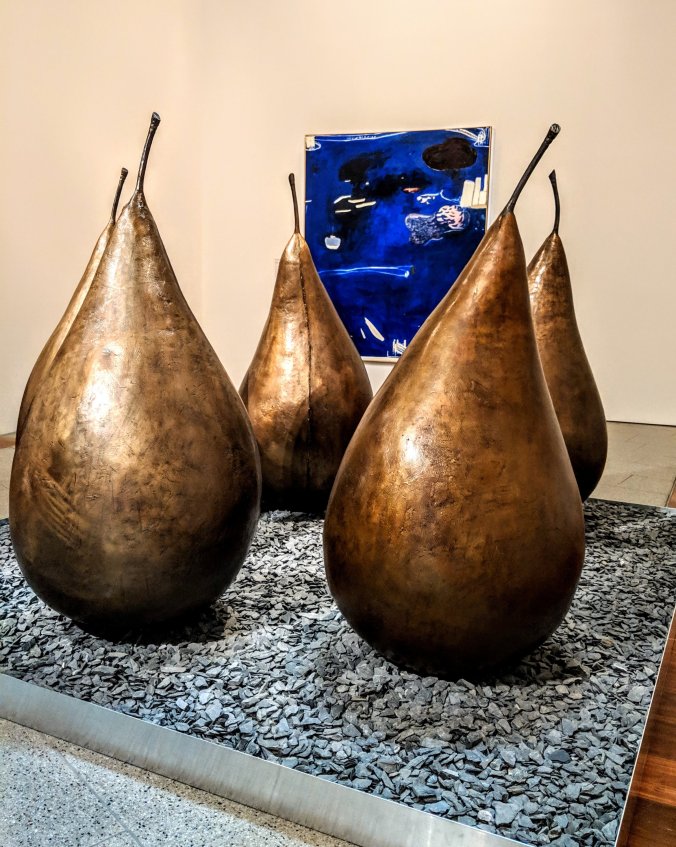 I won’t go into a huge amount of detail about every work. Nor will I deliver much on the background of George Baldessin or Brett Whiteley, except to note they were born in the same year and were Australian artists of (perhaps unequal) renown. 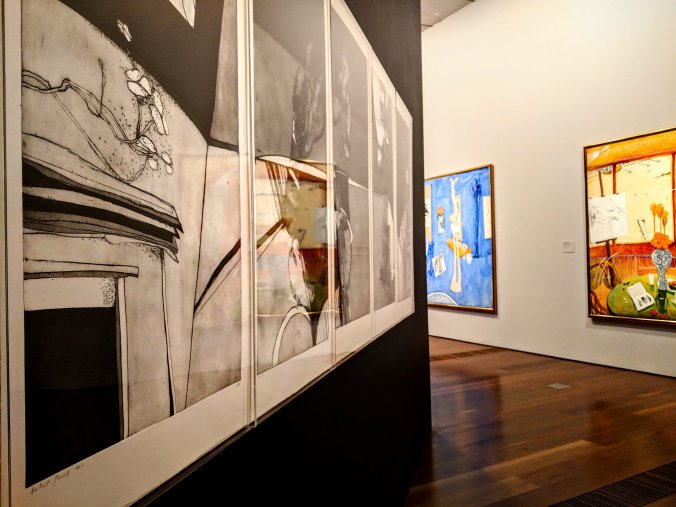 Many of the works spoke to me with their intensity or their insistence on distortion or colour, some made me uneasy and others hit my eyeballs and bounced around in my head making barely an impression at all.

My failure: all I see is a Celeste Barber challenge.

This kind of variety of experience in an exhibition appeals to me.

No collection of art can be everything to everyone, nor to just me.

Thus, I don’t why, but I liked Baldessin’s preoccupation with pears.

Banksy’s been riffing off Whiteley.

However, I appreciated these pears even more when juxtaposed with other works in the exhibit. 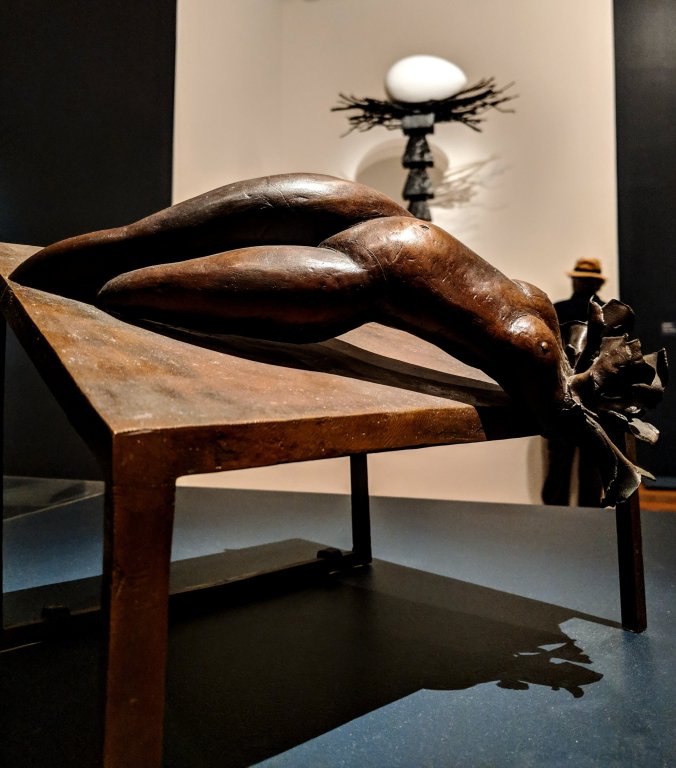 However, I don’t want to particularly discuss what I liked, because like is about taste and preference and every human differs on these matters. Forever having to defend what we like is boring. 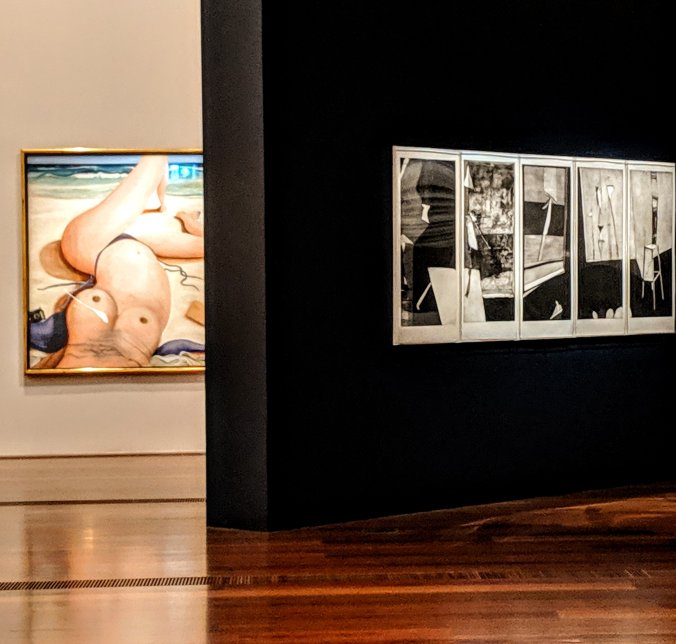 This leaves me with two pieces of art I want to address: Whiteley’s major work, The American Dream (1968–69) oil, tempera, collage and found objects on plywood and Baldessin’s sculptural piece, Personage, window and factory smoke, (1966) synthetic enamel on cast and fabricated aluminium.

Baldessin revealing the obvious, while hiding the psychological.

There is a film, mid-exhibition, featuring snippets of interviews with both artists. At one point Baldessin reflects on Personage, window and factory smoke, explaining the work is about how office girls are very often only seen for their physical attributes, rather than for any interiority (his word). He said wanted to show one of these women in this environment.

Phallic smoke & a woman, extruded from herself.

Yes. I agree he places a woman in a grim industrial world (that turns life into objects) but I don’t see a woman’s interiority or individuality in this work. Rather, Baldessin isolates physical attributes in the same way the men he says do when they look at women. He then draws the viewer’s attention to these legs and breasts, by highlighting them in this bleak and slightly phallic landscape. In recognising society’s failure to see interiority but failing to reveal an individual woman’s interiority he has I suspect, negated his own stated goal. 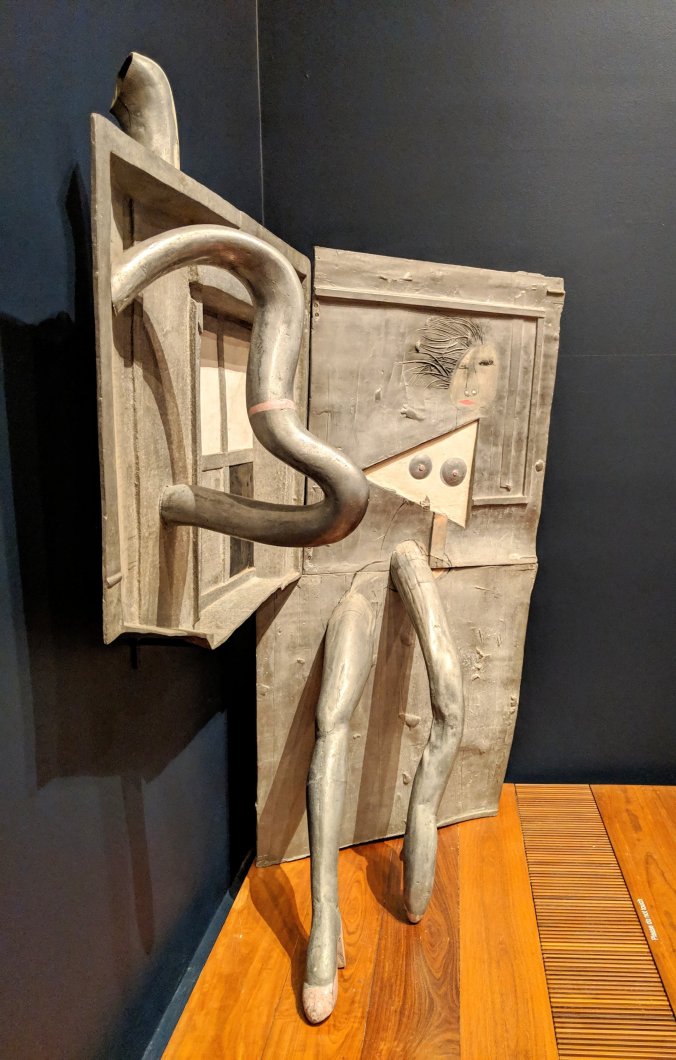 But by representing not a woman, but a particular perspective of men toward women Baldessin continues a major western artistic tradition concerned about rendering depictions of women a certain way for the view of men.

Baldessin seeing & not seeing a woman.

So, while the film provides insight into Baldessin’s theoretical approach, for me it also reveals how his realisation that women have minds is not expressed in this work or others, what with their missing faces, and contorted, anonymous bodies. 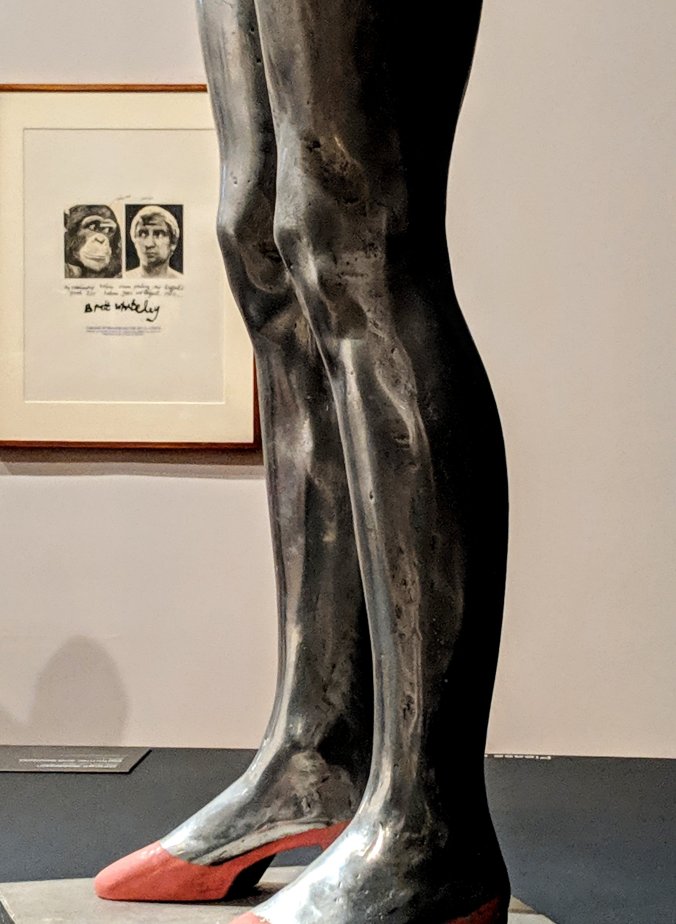 So what I am I left with? Questions. In a sense questions makes this ‘personage’ good art, even if I am unmoved by it. I have been left to consider if by looking at this woman, whether I am made complicit in this looking for the sake of what she is reduced to.

Or, from the perspective of 2019, am I beyond being recruited into 60s ‘male gaze’ experiments? The other question Baldessin poses to me is what’s with the pink high heels he repeatedly represents? All I can say for certain is that the idea of explaining why I liked or disliked a piece of art isn’t interesting.

So that was Baldessin. Onto Whiteley’s The American Dream. I want to re-title it An Australian Dreams of American Expansionism. 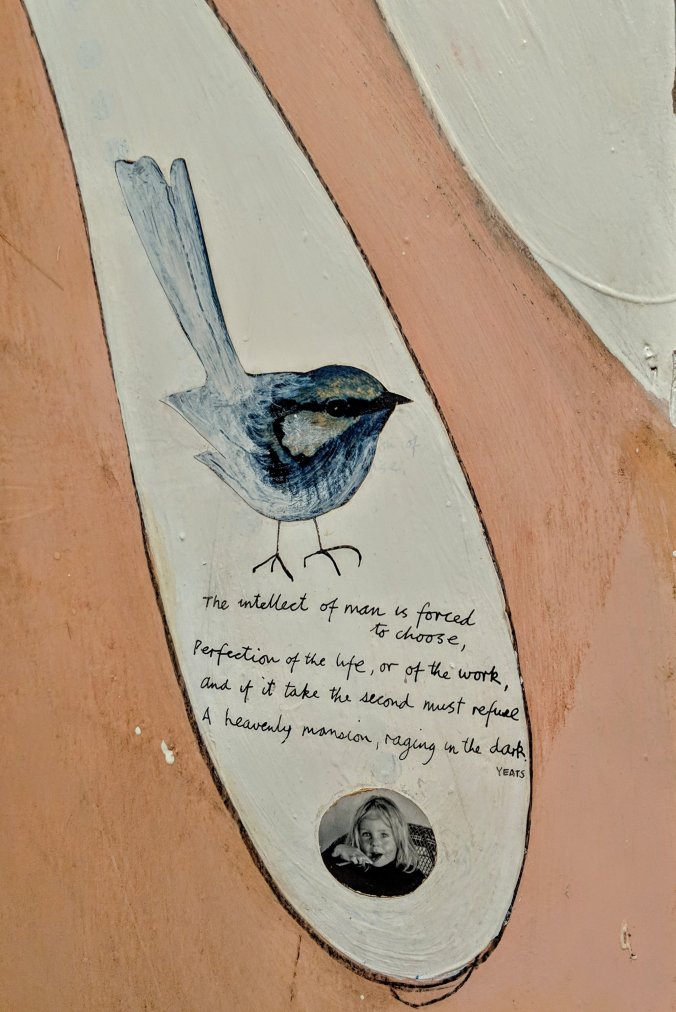 It is comprised of a room size panorama of joined panels of painted scenes, found objects, text and sculptural pieces. I read it from right to left, from the ocean, seaside and coastal regions, to a Japonisme scene, to a scene featuring the Americanisation of Uluru, under a cityscape with symbols above it, including a swastika.

This is followed by what seems to be a panel about education or intellectual pursuits, with text. These are followed by an ear listening through diodes to a hyper-sexualised Vietnam war fantasy in blood red, to a black and electric white explosion scene, a red mushroom cloud, then a clock panel featuring influential artists to a final panel featuring a bird and a sun.

The whole was both breathtaking and shabby, as well as panoramic and minute, and immensely personal and offhandedly casual.

Some of the scenes are lyrical and serene, other’s uncanny, or violent and weird.

But the details felt like discoveries, so without loving the style, I found myself dwelling on each vignette.

I was entranced by tiny birds, pasted images, and by reading the text and wondering about the juxtaposition of women and bombs.

The more I looked, the more I wanted to look, as if looking here would help me get Whiteley and the world. This is too, a contrast to the Baldessin piece, which was grey and impersonal and alienating and, for me, uninviting to look at.

Looking more at the Baldessin’s oddly extruded aluminium legs doesn’t help me know him or her, but this particular Whiteley work is different. Ok, Whiteley’s panels might also be alienating, but some panels are also inviting.

The panels are like reading pages of the artist’s private dream diary. I could read this and understand Whiteley had complicated relationships with women, had nightmares about the Americanisation of the world through force and through culture and how he was immersed in the events around him: political assassinations and war and protest. 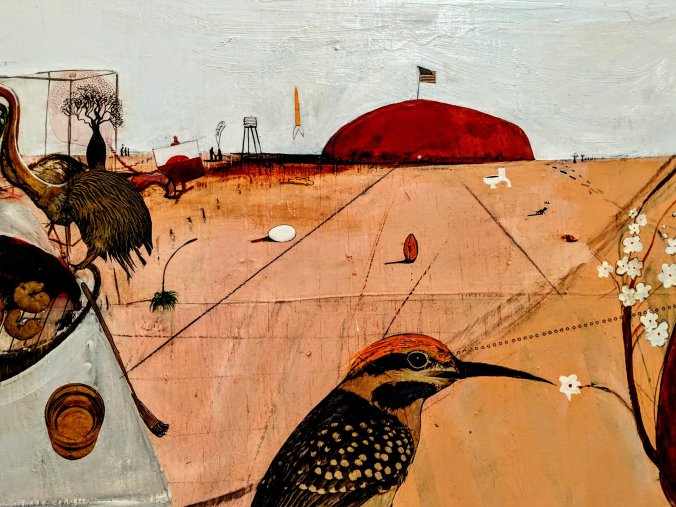 I can see Whiteley working out how he wanted to interrogate everything he found confronting about his subconscious, his relationships, about his alien-Australianness and about America. 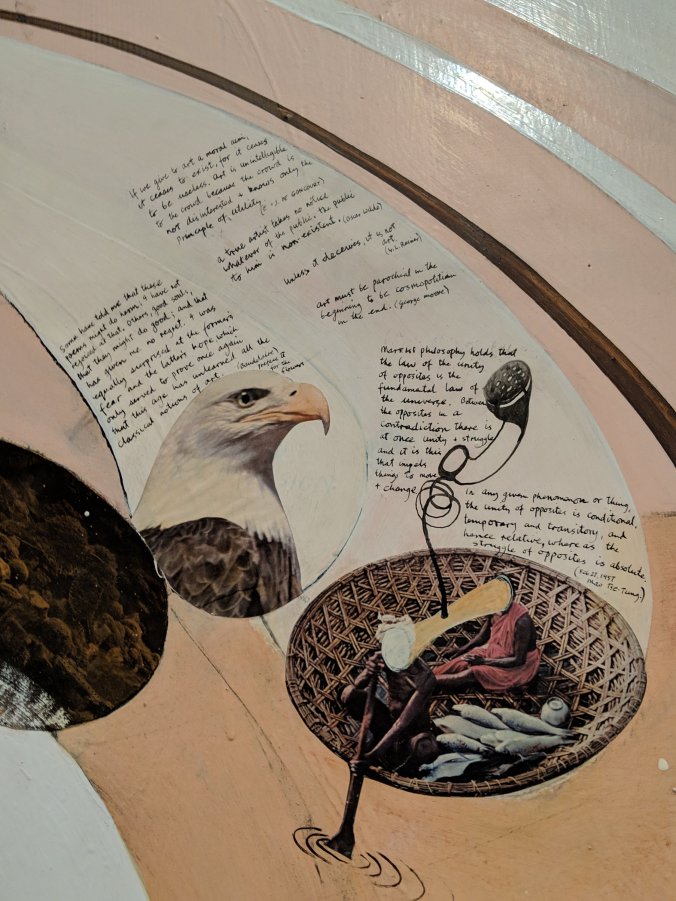 His result presents the viewer with an arcane equation where to solve X (Whiteley) you need to balance the opposites he depicts to reach a Zen state.

Basically, I can see why Americans hated this work and why Whiteley fled New York. All of this makes me appreciate it more than I might have otherwise. 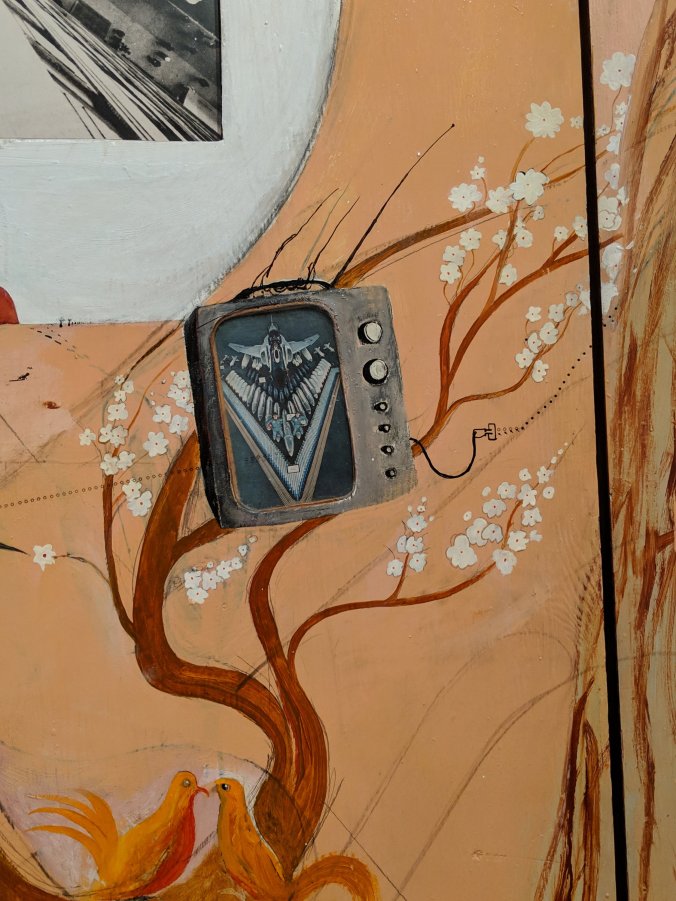 So, overall, I came to view Brett Whiteley’s art more highly and gained a crash course in the works and career of George Baldessin. Couldn’t have asked for more.