Chances are, you, like me, had never heard of the Vaquita Porpoise until recently. If  you have, it’s because there are now less than 100 in the wild.

We humans think we own this joint, and that we’ve conquered it. Humans describe it  in terms of our economies and resources. But most of us barely know it. It’s the space ship that sustains us, it is what shaped who we are, along with everything on this tiny planet and we take it for granted. We only recently found out about its secret underground seas, and can barely conceive of microbial colonies living on oceanic volcanic vents. And environmentally, we keep biting the hand that feeds us. How stupid is that? 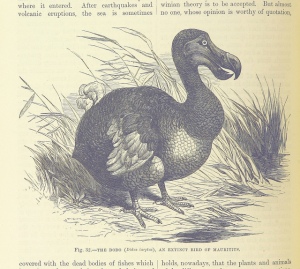 Dead as a. ‘Callous disregard’ is a human calling card, seems we do take this into space.

Meanwhile, we simple humans have yet to comprehend the magnitude of Earth’s complexities.

This is because we’re occupied with narrow time frames, a day, a month or four score and seven years. To the world’s largest flowering plant (that lives like me in Victoria, Australia), such time frames are merely a growth stage. Your dog crams an entire life into maybe 12 years. Remember how long days were when you were a kid? They are like that all the time for dogs. No wonder your dog is happy to see you at the end of such an immense time period as a whole working day.

If you saw Interstellar you will have seen how time is demonstrably relative.  It is true as far as we know. Yet, time and space and even direction are understood differently across cultures and across species. I sometimes wonder how a writer can hope to convince readers of the reality of an invented world when we know so little of, and care even less about, the ‘real world’.

I’ve been sporadically reading John Scalzi’s Zoe’s Tale and I like the world building and her voice. His complex ideas about intelligence and consciousness and responsibility, regarding Zoe and the Obin are compelling. However, so far I have issues with colonists who think nothing of habitat destruction upon arriving at new planets. The breathtaking hubris of this. They aren’t even going to new planets to investigate or study them, except to measure the safety of the biosphere. Although, I like the idea of Space Mennonites. It might be set off this world, but it seems Scalzi’s interplanetary settlers are as flawed and ignorant as any European settlers/explorers to Australia and everywhere else. In his future humans haven’t progressed much.

People wonder why a couple of Johnny Depp’s dogs caused so much mayhem. It’s because 200 years + of deliberate and accidental animal and plant introductions to this continent wreak absolute havoc with native flora and fauna. And they don’t need more havoc by some unforeseen bug hitching a ride, or rabies or who knows what else.

Some introduced disease brought into Australia could end this lil platypus, when people have only just started to believe in them.

Anyhoo, I write SF. I like to speculate. I can imagine all kinds of worlds more or less advanced than our own, in all kinds of ways. Yet, I sometimes wonder if we are evolved enough. Not just in terms of technology, but in terms of being ethically, or morally, or spiritually prepared to properly encounter and appreciate Earth’s own animal and plant intelligences, let alone any alien intelligence. 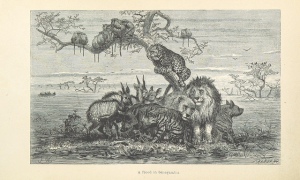 Nature, red in tooth and claw. Or as this depicts, in balance and with mutual respect until stupid people.