The last great frost fair, a frozen Thames, and kids in danger of being transported (amongst other things), oh yes, it is Doctor Who in 1814 London. Thin Ice presents Bill with her first ‘Star-Whale’ conundrum, does she give the order to save the beast below, or have it killed? Except Amy intervened to stop The Doctor’s decision after he reached a conclusion on his own.

Not the Star Whale. Not the River Fish. This one is for next season…?

Regardless of Bill’s answer, this episode is The Doctor again putting the responsibility for the decision to the Companion, only unlike in Kill the Moon he doesn’t lecture her, give her half the information needed, run off, and come back all smug ( I really loathed that episode). Instead Bill and The Doctor have a mature discussion about death that continues as events unfold. 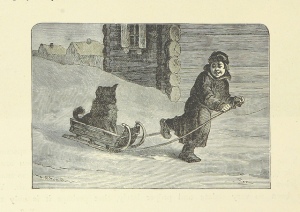 You know where these two ended?

It’s good Bill reacts to the casualties around her. She should not brush off death lightly, and Ms Potts reminds long-term viewers that even though, by now, we expect such losses, as the stakes go higher, it should affect us. What does it say about us, when it doesn’t? Maybe something about it ‘only being a story’? But if that is the case, what about how my own (and perhaps your) visceral reaction to the racism directed at Bill? The verbal attack on her was shocking. Are viewers more shocked by that, and by the Doctor’s own response to the racism, than the preceding deaths? And that is probably the wrong question.

Did all this seem very prescient regarding the debate about how to debate (or not) anyone with extremist views?

Is this about entertainment transforming violent or sudden deaths into backdrop scenery for the action so often audiences are inured to them, even for a family television program?

This picture is like the pretend castle I visited once in rural Australia, except for everything in this picture.

I once visited a mock-Medieval castle which featured jousting and other events. It was a bit like the Thames in 1814, almost as cold and dark, and it featured a group of young people. I was helping supervise a day out for a small group of teens whose parents and family members needed respite. During the day we wandered around and then watched as a ‘witch’ ‘trial’ was enacted. It was loud and colourful and one teen had to stop it. He had no concept of acting, nor plays, so what was unfolding in front of him was real. We couldn’t reason with him, and didn’t really have the capacity to hold him back. He had to save the woman in stocks about to be flayed. Looking back on that, I will always consider the ability to see the difference between real and let’s say ‘fake’ as a helpful life skill and benefit. However, I am suddenly proud of that lad because he was going into action to save that woman from torture. It wasn’t a game. He wasn’t ‘playing’  – he was sincerely prepared to put himself in harm’s way to aid a stranger. At the time, I was scared. I was so busy reacting to my concerns about him hurting himself, or others, and attracting ‘bad’ attention that I didn’t see it like I can now.

What’s the point of all this? I guess I’m asking who am I to judge how to react to fiction when how we react to reality is also up for debate.

And this is how a good story, told well, can get us thinking. Well done Australian Sarah Dollard.