Initially, I didn’t think I had much to say about the Doctor Who episode Knock Knock, but never fear, notions came to me, because’s there’s nothing quite like a decrepit mansion story.

Leaving the light PG horror aside for a moment, this episode revealed the big theme of this series: barriers. Look at all the ways so far walls and barriers are more than what they seem. In a future human colony The Doctor reveals the walls are robots (that eat sad people). In this episode, the walls are navigable passages for alien wood lice (who eat student people). Maybe the theme is eating people? No. It’s definitely walls, because what’s the big Gallifreyan looking vault door except a barrier? 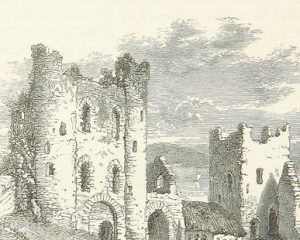 Beyond the theme, Knock Knock did what I expected it to, arc-wise in that we got more about the vault and suspected inmate, and especially how The Doctor can enter at will. A frenemy is inside? We also got Bill schooled in beginner Time Lord factoids, foreshadowing that regeneration thing we all know is coming.

Let’s return to the horror. This is your basic Old Man Landlord isn’t an alien/ghost at all story, featuring an actual mention of Scooby Doo and a bunch of plucky young people. David Suchet was menacing, while the reveal about his motivation was a nice touch. It formed a neat counterpoint to the Doctor (not-your-grandfather) Bill relationship.

We learn too that the Sonic Screwdriver still doesn’t do wood. Yet again an old house lends tension to story, just like in Hide, Blink, Pyramids of Mars or Image of the Fendahl from way back when. And yet again wood people need help to help themselves, like in The Doctor, the Widow and the Wardrobe, which was also a story about mothers and their children. So many parental issues going on.

There you go, an atmospheric, but simple enough story doing a lot of work. Not sure about the return of the students, but still, good work.