The National Gallery of Victoria winter masterpiece exhibition this year is Vincent van Gogh and the Four Seasons (on now). I finally got to visit on a particularly sombre, grey Melbourne Friday afternoon.

Last year the big exhibit was Degas. It was interesting. I recognised familiar paintings of the usual suspects, admired paintings I’d not met before and generally marvelled at his bronzes, particularly the horses. My response, to Degas’ art was neither deeply intellectual nor emotional, except for the back stories to some of the subjects – such as The Little Dancer. However, little about his practice got me wondering how he achieved it. Perhaps it was all too familiar, perhaps it something about my perception that meant his story and style didn’t exactly grab me. And then of course it became about his ‘male gaze’ penchant for nudes. Or, if you’re less arty, his overtly leery view of a very lot of various naked women going about their private business. 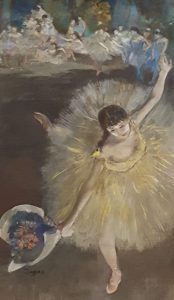 Degas, but not deja vu.

The above is a long-winded introduction to van Gogh, but pertinent, because my reaction this time to 2017’s ‘blockbuster’ exhibition was entirely opposite. It was visceral, emotional, and intellectual. Yes, this is due in part to his pop-cultural status as the definitive tortured artist. It is also due to the familiarity of his life and works and the interpretation of both, in song, and an upcoming film, and even in the likes of Doctor Who and the Simpsons. Even teen me wrote a poem to Vincent (don’t worry I won’t inflict it on you). All of which is to say, if ballerinas are Degas, then almost anything can be van Gogh, if the colours and brushwork are right. 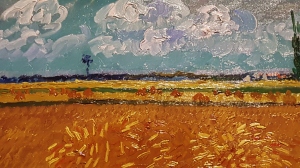 Speaking of which, I can spend hours looking at a van Gogh painting. Particularly the ones where the oil paint glistens in the light so the lines and directions of his brushwork become just as vibrant as his yellows and golds and purply-blues.

Light reveals the movement in his work. It conveys the energy of his hand in motion to the viewer through the medium of colour, and direction, in small, quick, but deliberate strokes. 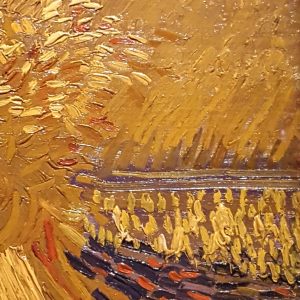 And it was all yellow.

It is art that feels immediate. Degas is history, a moment captured, completely of its time. Van Gogh’s seasons evoke places and eras too, but the electrifying brightness of his springs and nights, the hues of his autumns, the starkness of his winters, well, they’re immortal. The places are specific, but the movement of colours therein are universal. Or something.

While his places are of moments, so too his faceless individual forms evoke human experiences without being identifiable. They are ghosts, faces obscured, or with their backs to us, or bent over working. They are not for us, they do not peer out; busy in place, they are home. We are the interlopers.

Winter: a solitary figure of the same stuff as the cold earth.

Moving around a van Gogh reveals the details of his intentions. To to be up close is to see the horizontal and vertical contrasting shades. Stand back and admire the view, but lean in and realise the concentration it took to construct it. 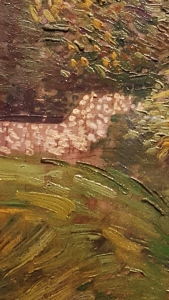 A fellow attendee, also in awe, remarked at how the paintings were woven. She was right. Warp and weft of colours make the whole.

He was not all about colour, however.

All of this means a print of a van Gogh seems dull and muddy by comparison. It’s two-dimensional rather than his three dimensions. That could be said of any print of an oil painting. However, the Fibonacci swirls in his clouds, the star burst lines of his shrubberies, and fields of sunny vertices make van Gogh’s work instantly recognisable, but also so much more energetic when confronted by the real thing, framed on the wall. Which I why I took few photos of entire paintings, but rather close-ups of sections.

Maybe I am too enamoured of his technique, but then again, he had more than one. Autumnal and winter sketches and paintings show his political leanings through earlier, darker works featuring farmers.

Light gets through even in his darker works.

Meanwhile, a section of the exhibit demonstrated the influence of Japonism on his aesthetic, and forms a worthwhile exhibit of itself.

Van Gogh, a late-ish blooming outsider artist, found and pursued his calling. That’s relatable. Maybe it doesn’t just comes down to us being suckers for tragedy, even if the art and the sadness of his life can’t be separated.

There is so much more to say, but perhaps it is better to end by urging you, if your can, to visit Vincent, follow his lines, seek his light, and bask in his fields.