The doom monks of the previous episode Extremis are back in Doctor Who‘s Pyramid at the End of the World. As the latest Big Bad, these aliens are eerily reminiscent of the crypts of actual mummified Capuchin friars that hang from walls and ceilings.  These aliens are even dressed the same (Capuchin indicates hooded). If you want to look at something really macabre and not just grimly fictional, Google search images for their crypts. I can testify that the search histories for writers are always intriguing, weird, and possibly troubling.

Doctor Who has a thing for bad/religious types in red, whether in Rome, Scotland or in Extremis. I’m getting ahead of the trend by suggesting this look.

Anyway, these Alien Pyramid Monks also recall the Silence, right down to the religious feel to them (and the name, obvs). The Silence hear confessions of course, and these monks demand something similar: a heartfelt call for help. Not a request for aid out of fear or political expediency, but one out of love. Then they can conquer the world. What we see from the preview for next episode is that these APMs can change history and memories, which is also Silence-y. With all this, and with the Vatican last episode and previous episodes featuring the Papal Mainframe and Anglican monk-soldiers of the Byzantium, I’m thinking Steven Moffat has done a lot of thinking about Christianity and Catholicism in particular, but with its history, death rituals, public displays of worship and adoration, including the ornate buildings and robes, plus obsessions with guilt and bodies, why not? Here is an interesting critique of how well (or not) this has been done.

It’s just not about Christianity though. These aliens have done their homework and settled on the pyramid to best represent their importance and open presence on Earth when they smack it down on the flash point Madeupistan. In terms of the Whoniverse, it had to be a pyramid. Those things are everywhere (like on Mars). 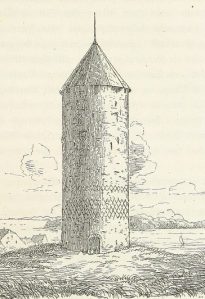 More rocket-like but less imposing than a pyramid for a landing in Madeupistan.

But for all their get up, these beings are less monks and more like the Fates; literally holding the (neon) skeins of the future. Or, if you like they are dead Time Lords in death robes, rather than their stupid(er) outfits. In offering to intervene to stop the Doomsday Clock from reaching mid night they are specifically cognate to The Doctor, who does intervene in stuff (unlike the others from Gallifrey who long made non-interference a policy). The Doctor doesn’t want power in return, although he is Earth’s President. However, when the humans, blind to their futures, acknowledge the foresight of these monks, they do offer them their power (but it is not so simple as that – as explained above).

The Fates come with symbols such as spindles & shears. And are women. Would it have killed Moffat to have Alien Corpse Moirae?

This is where we get to the examination of blindness and its significance for The Doctor, (even if his conundrum in this instance would have been solvable with a phone camera and Bill’s help). Nardole keeps telling The Doctor he is hiding his blindness to avoid revealing it to his enemies. Sure, The Doctor agrees. But the Alien Monks themselves don’t care, as walking corpses they barely have eyes at all. Meanwhile, despite Nardole’s constant narration, no one twigs; the blind leading the blind, indeed.

Sonic Scope for the Blind.

No. The actual reason why The Doctor did not immediately reveal his continuing blindness to Bill is history. His Companions always end up making sacrifices due to his vulnerabilities, and failings, and their faith in him: see River Song, Adric, or Clara. He knows this and has been told this by the likes of Rory. The Doctor requires much of his fellow travellers, and their willingness to help him place them in positions that endanger themselves and others. Thus, they will save him, even if this condemns themselves and in this case, the rest of the world. Thus, as soon as Bill sees the light, she acts accordingly. She sacrifices the world to save The Doctor, because of her faith he can, with his eyesight restored, save them all in return. Ah me, once, more unto the Moffat Loop, dear Companions, once more.