We knew this would happen. New companions of The Doctor would return to Sheffield and from there, make a decision to keep going. In terms of Joseph Campbell Hero’s Journey schema, heroes are called, get help (The Doctor), and then may resist the call (go home) but then decides to cross the threshold. The three companions very clearly cross this (TARDIS) threshold when they assert their reasons for continuing to travel with The Doctor. Inside the TARDIS they physically and metaphorically ‘step up’ to be Companions. But we already knew they would. Offer children a suitcase full of candy and they’ll take it, The Doctor once said. But this episode provides more nuance than usual as to the motivations for why.

The webs of our griefs connect us.

Why return to an empty house to face your grief and the absence of a loved one? Why return home to a dead-end job and an absent father who only now wants to become a ‘proper family’? Why return to face the usual familial squabbling,  pointed personal questions and social and professional pressures? Well, they’ll have to one day, but not yet.  I think Graham and Ryan are developing nicely as characters, who are awkwardly renegotiating their relationship as they share in their grief. But I want more to Yaz.  Her mother, with her dry wit and inquisitive nature maybe the way.

Arachnids in The UK makes much of basic human fears. Yes, spiders, but also nature made monstrous through human intervention. This is a Frankenstein narrative, featuring literally toxic American faith in capitalism and gun violence.  But what should people fear here? Giant spiders, or a for profit business controlling genetic and toxic waste so poorly spiders mutated? I know which one I have visceral fear of and which is a reality made into a fearful story. 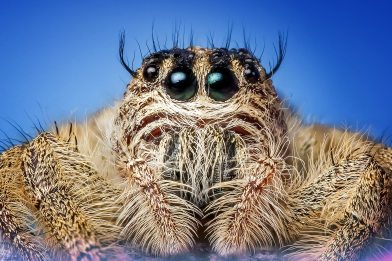 Sure, you don’t want her in your face, but she’s more scared of you than you are of her.

It’s almost Halloween, and if you want to be really terrified, Google toxic leaks like I just did. I found stories of how half of the Orcas in the world are threatened by PCBs used up to the 1950s currently leaching into the oceans. As as well as HAZMAT situations in Oregon, Ohio, and South Africa, while Wikipedia even lists ‘notable waste disposal incidents’. And these are just what are being reported. So show me all the giant spiders you like, they have nothing on what is really terrifying and dangerous to all life on this planet.

As this program pointed out, British spiders aren’t that nasty. Ok, recently a few London schools were closed over a spider that caused slight rashes when it bites.  But they are essentially harmless when the right size. But as an Australian I can show you harmless spiders the size of dinner plates as well as 5mm long brilliantly coloured dancing Peacock Spiders. However,  imagine if toxic waste mutated Redback Spiders or Funnel Webs, or those spiders able to necrotise flesh. So yeah.  Spiders of the UK, even with the death toll,  you’re lucky it wasn’t set in Australia.  Or didn’t feature an Australian spider backpacking around the UK looking for bar work.

So we meet Yaz’s family. She has two entirely reasonable seeming parents and an obviously annoying sister. Phew. At least her mother is alive. Which is more than I can say for the Mother of Spiders. Of course she was going to die.  The Doctor can always see the beauty and pathos in living creatures out of their time, or in this case, out of their scale, and mostly can’t save them (eg: invisible alien creature in rural France, a T-Rex in Victorian London, the Lazarus Machine Man/Monster, a giant wasp in 1920s England,  Space Spiders beneath the Thames). The spider was never the enemy. This being lives in the location of our fear, but The Doctor and the researcher know that since they are basically impossible, they can’t last.  They know spiders don’t have lungs in the same way humans do, which is one reason there are no giant spiders. Thus, The Doctor and the arachnid researcher got to use science to contain the spiders, but also to know the Mother was dying. And thus we are delivered of another dead mother…

The hotel mogul is basically Trump, cast as his rival. It’s interesting to see how The Doctor treats and then looks at (or into) this character. She doesn’t recognise him at first, mistaking him for Ed Sheeran.  But at the end, I felt she could’ve said something before Graham interjected. Something reminiscent of how with four words The Doctor ended the Prime Minister-ship of Harriet Jones.  It takes less in Australia by the way, probably three words, something like ‘polls are down’ or ‘bite raw onion’.  Thus, I get the sense The Doctor could return to this future US President,  just as she needs to confront the Stenza. It’s almost like The Doctor is warming up, or bubbling away before she reveals what she is truly capable of.  The question is whether she’s keeping a lid on deliberately.

To end, I bring you the Peacock Spiders of Australia. Smaller than your finger nail with more moves than Disco Stu: